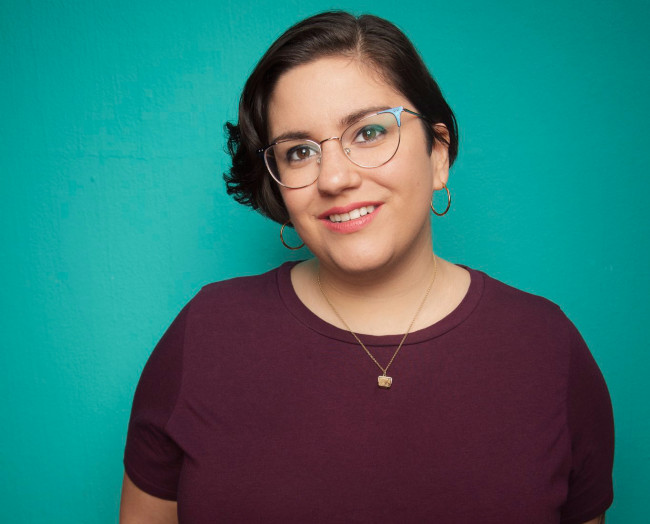 For seven years, Samantha Ruddy’s career in stand-up comedy has built up to this moment. After her big break on “The Late Show with Stephen Colbert” and landing a job on “Full Frontal with Samantha Bee,” she released her debut comedy album one month ago… the same day a national emergency was declared in the United States.

“I was not aware that we would be in the midst of a pandemic, and I made the foolish decision to release my album on March 13th,” Ruddy said, noting that she hasn’t seen many reactions to “Logging Out” since it hit digital platforms like Spotify, Pandora, Amazon, and Google Play.

“I guess people had bigger things to worry about. It has gotten some nice feedback and a little press, like an interview I did with CBS, but I think we’re all a little distracted right now. Or it was a bad album. Either or. I like it.”

This important opportunity to reach a wider audience getting buried by the chaos of this global outbreak is bad enough, but she is also living in New York City, an epicenter of the coronavirus crisis. Instead of panicking or wallowing in self-pity, however, the 28-year-old is dealing with it like any good comedian right now – by posting funny tweets and videos.

World’s most annoying weed dealer drops by your apartment during COVID-19. pic.twitter.com/Jl8SxdZJvk

While this is a welcome distraction for those stuck in quarantine, “likes” and retweets don’t quite produce the same satisfaction as stand-up does.

“I miss it a lot already. The energy you get from a live crowd is so hard to replicate online – for better or for worse, honestly. When the crowd is great, it makes your life so easy, and when the crowd is rough, it makes performing so much harder,” she explained. “But those highs and lows are the reason live stand-up is so special.”

Long before “social distancing” became a common phrase, Ruddy recorded “Logging Out” back in October at the Good Good Comedy Theatre in Philadelphia.

“It’s a great small venue over in Chinatown that I always have fun performing at. I love Philly so much. I’m a New Yorker at heart, but we spent a lot more time in Philly than NYC when I was a kid despite them both being two hours away,” she noted.

She’s referring to growing up in Scranton and nearby Mayfield. Living in the Big Apple since 2014 (where she was named one of “50 Funniest People in Brooklyn” by Brooklyn Magazine) has, of course, changed her perspective of her hometown just a bit over the years.

“I love Scranton deeply. I will say I don’t think you quite grasp the lack of diversity until you spend time in a bigger – or at least demographically different – city, so that’s something that changed my perspective. Scranton is still one of my favorite places, but it definitely would’ve been nice to know like a single person who wasn’t an Irish or Italian Catholic when I was growing up,” she related.

Ruddy started with an award-winning sketch comedy group in college before they tried stand-up at an open mic and she “decided to stick with it.” While she has performed at major comedy events like the New York Comedy Festival, San Francisco Sketchfest, and Melbourne International Comedy Festival; headlined Carolines on Broadway; and hosted countless shows before making her network television debut on “The Late Show with Stephen Colbert” on CBS, she was still stressed out when recording her first album.

“I wish I was that fun, spontaneous kind of performer who’s just like, ‘Oh, it was like any other show!’ It wasn’t like any other show. It was a recording and if I screwed it up, a nice man from the record label wasted money on a flight. But the recording went really well, actually. Probably because I’m an optimist,” she cracked.

“I named the album ‘Logging Out’ because that’s the punchline to my favorite track on the album. It’s a really silly but kind of dark-ish joke that either kills or gets a groan, so I never know if it’ll go well, but I love it so much that I keep it in my act anyway.”

Gathering a mix of personal stories, relatable observations, and self-deprecating humor about everything from being a lesbian to weed to fast food toys to dating conspiracy theorists to the “Italian hillbillies” of Pennsylvania, Ruddy knew she had the right material to join those ranks when she “found out how much you can make in royalties from satellite radio.”

“This [album] feels like what I was going for. I hope I grow and change and that I’m not the comedian that I am now in five years, but this is an accurate representation of who I am – for now!”

A few of those jokes were also in her “Late Show” spot, which helped her book tour dates across the country and score a dream job with another “Daily Show” alum, Samantha Bee, on her late-night TBS show “Full Frontal.”

“The majority of my job is thinking of funny tweets and video ideas for online. I love it. We’ve been working from home during the pandemic. Sam is taping the show in her backyard with her husband, Jason, and kids. I miss the office and my coworkers a lot, but I’m very lucky to still have a job – let alone one that I like.”

Her comedy has afforded her all kinds of unique opportunities, like appearing in Comedy Central sketch videos and Marvel’s “Eat the Universe” cooking show with celebrity chef Justin Warner, as well as writing for popular websites like CollegeHumor, Someecards, Reductress, but her favorite was the chance to be an announcer for the annual New York City Pride March – “It’s so much fun and such an honor.”

Hopefully that will not be one of many major events postponed or canceled due to COVID-19. Once it’s safe to travel again, Ruddy hopes to fly to Los Angeles to perform and visit West Coast friends. She’d also like to hug her family back home. Despite her accomplishments, she still gets asked about “The Office” like everyone else who says they’re from Scranton, where the hit sitcom was set. She doesn’t mind, though.

“People always go, ‘Oh, like ‘The Office?’ Oh, I bet you’re so sick of people asking that.’ But I’m really not; it’s a great show. I’ll talk about it all day,” Ruddy said.