The concert will be created exclusively for this event, making this the largest ever one-night show to play at outdoor theaters across the United States and Canada. While the full list of theaters hasn’t been revealed yet, the Circle Drive-In Theatre (1911 Scranton/Carbondale Hwy., Dickson City), the Garden Drive-In (20 State Rt. 11, Hunlock Creek), and the Moonlite Drive-In (1190 Shoemaker Ave., West Wyoming) have all confirmed on social media that they will be screening the concert.

“I am so excited to get to play again. I have missed it so much and want to get back to it,” Brooks said.

“This drive-in concert allows us all to get back to playing live music without the uncertainty of what would be the result to us as a community. This is old school, new school, and perfect for the time we are in.”

The unique event will be produced by Encore Live, which has developed a reputation as one of the most innovative event production companies in the country. In the absence of traditional live events, the company reached exclusive agreements with drive-in theater owners across the country to safely bring fans this first-of-its-kind concert on a massive scale.

“Families need safe entertainment options that they can enjoy together this summer,” said Encore Live founder and CEO Walter Kinzie.

“We’re excited to partner with Garth, who’s already done so much to help the entertainment industry during these tough times, to provide a truly unique and incredible concert that will do a whole lot of good for local businesses and communities.”

Tickets go on sale next Friday, June 19 at noon at ticketmaster.com/garthbrooks. Tickets are general admission with limited availability. They will cost $100, all inclusive. Each ticket will admit one passenger car or truck. The event will take place rain or shine and will begin at dusk, around 9 p.m.

The show will adhere to guidelines recommended by the Centers for Disease Control and Prevention as well as all state and local health mandates regarding the coronavirus pandemic. Encore Live has partnered with leading health experts to establish procedures for staff and fans. These will include maintaining at least 6 feet of space between vehicles, the use of personal protective equipment by staff, leveraging contactless payment and ticketing systems, and limiting capacity in restrooms. Guidelines around concessions will also be enforced to abide by individual state regulations.

“I hope people are going to start working on flashing their light, honking their horns and hopefully rolling down their windows,” Brooks said on “Good Morning America.”

“The cool thing is drive-ins aren’t like they were when we were kids,” he continued. “We had the speaker that you put on the window, now just tune right into your own car radio. You can blast it and blare it as loud as you want – windows up, windows down, sing along. This is a perfect way for us to still get to play music and still follow all the rules that we’re under right now.” 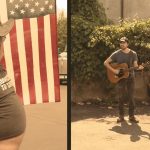