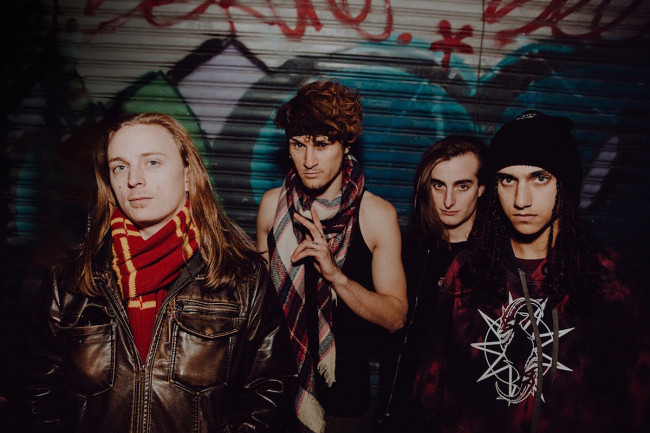 Max Portnoy, son of ex-Dream Theater and Sons of Apollo drummer Mike Portnoy, founded his own band with Tallah. Musically, the Pennsylvania “nu-core” quartet is oriented towards modern bands like Code Orange, Slipknot, Korn, and Deftones, mixed with industrial elements. YouTuber and Hungry Lights songwriter Justin Bonitz handles the standout vocals, and the other members are no blank slate in the modern metal scene either, including connections to the Northeastern Pennsylvania music scene.

Tallah shares a passion for playing intense, angry, loud, and heavy music, relying on the spirit of innovative metal realized through panicked guitar screams treated with industrial elements and distortion. Screaming vocals mixed with melodic choruses and driving bass guitar with deep and dirty tones sync up effortlessly with the thunderous bellows of the drums and screeching ping of the snare.

They also offer an unexpected, different, and insane live performance at every show, including the inaugural Darkenheavy Campfest at Mountain Sky in Jermyn last fall. The energy they emit onstage is like no other and challenges listeners to stay put.

Today, they are making metal disturbing again with the release of “The Silo,” a new song and music video that hints at what is to come from their debut full-length album.

“‘The Silo’ is the lightest track on the album and the first time we’ve experimented with using more dynamics in our music. This song is a good example of showcasing what else we can do with our sound aside from the raw heaviness displayed in all our other tracks,” Tallah told Loudwire today.

Emerging from Pennsylvania in 2018 and combining the percussive force of second-generation drummer Max Portnoy with the pure, war-torn fury of vocalist and YouTube sensation Justin Bonitz, Tallah formed with a singular and unifying mission.

Intent on revamping the much-loved sound of popular nu metal acts of the early 2000s, Tallah draws influence from the likes of Slipknot, Korn, and Linkin Park while simultaneously fusing it with a modernized hardcore edge, as displayed by current sensations Code Orange, Vein, Candy, and Fire from the Gods.

Having followed Bonitz’s popular YouTube channel for some time – which boasts “How to Scream (10 Different Techniques),” perhaps the most popular scream tutorial at approximately three million views – Portnoy approached him to join a new project with guitarist Derrick Scheider and bassist Andrew Cooper, both of whom Portnoy had formed previous relationships with in the Philadelphia music scene.

The resulting explosion of chaos, controversy, and metal innovation birthed the band’s first EP, “No One Should Read This,” which was recorded at Spin Studios (Gojira, Lamb of God) in 2018 and released to critical acclaim.

Drawing inspiration from darker territories may have been a natural descent for the members of Tallah, but the band – Bonitz in particular – has cited everything from horror movies to Disney villains as a framework for their high-octane studio delivery and live performances. The vocalist comments that this is both a natural reflection of his own personality traits as well as a conscious decision to be seen as a diverse, heterogeneous act.

“I grew up enjoying the sassy, almost feminine evil of cartoon characters – that’s how I carry myself on stage. The evil villain thing is fun, but it does result in people thinking I’m a huge douche! They’re quite surprised when they meet me offstage and I’m just a normal guy having fun. The whole ‘evil villain’ thing isn’t always planned, but it comes quite naturally to me,” Bonitz said.

These mischievous characteristics have led Tallah to some controversy in the past, most notably with Bonitz’s arrest at the Chameleon Club in Lancaster. Strangely, it wasn’t him mounting of the stage’s rigging or the scuffle that ensued with a plain-dressed security guard (during which the band continued to play) that caused his arrest – it was his proclamation to a police officer, when asked, that his name was “Carls Jr” – the name of a popular fast food chain.

Locally, former Tallah guitarist Eric Novroski invited Bonitz to add his vocals and personality to a song by his current band, Wilkes-Barre’s Toothless, that has been well-received:

Following the release of “No One Should Read This,” Portnoy received the Modern Drummer Award for Best Up and Coming Drummer 2019, and the band performed at the massive Boomtown music festival in England the same year. Having now signed to Earache Records, Tallah recorded their debut album, “Matriphagy,” with producer Josh Shroeder.

Due for release on Oct. 2, “Matriphagy” expands upon the concept outlined in “No One Should Read This,” armed with a disturbingly graphic tale that is to be taken as a series of both literal and metaphorical events.

Without publicly alluding to whether or not the story emanated from any real-life events, Portnoy details the horrifying drama that unfolds throughout the album’s concept to give fans a small insight about the innermost thoughts and workings of Tallah.

“‘Matriphagy’ is a concept album about how an overprotective mother pushes her son to the edge of insanity through psychological and physical abuse. Having spent two decades trapped inside a glorified prison, and after some failed rescue/escape attempts, the son, in a state of heavy delirium, does the unforgivable to free himself from his mother’s wicked hold,” Portnoy described.

Set to a pleasurably harrowing backdrop of brutally heavy and talented musicianship, Tallah’s closing words on their forthcoming album state their intentions in a clear and concise fashion.

“It might feel like we’re at the point where everything’s already been done and there are no surprises left. We’re not sure that’s true, but whatever you think, we’re going to take what we love about metal and do it in our own way.”

See NEPA Scene’s photos performing at Darkenheavy Campfest on Sept. 28, 2019 here and watch a clip from the set below: 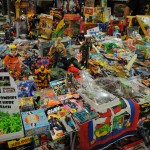