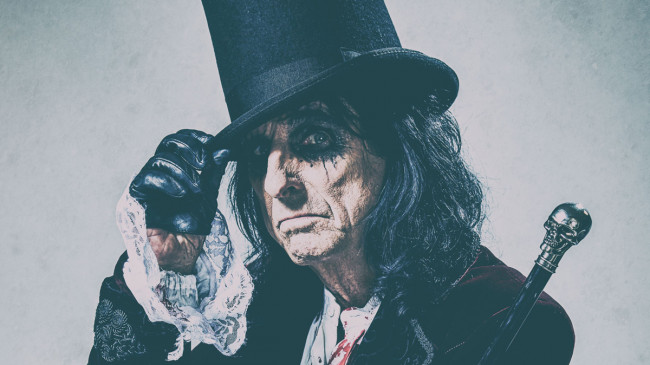 This week, the Alice Cooper concert at the Mohegan Sun Arena at Casey Plaza in Wilkes-Barre Township that was postponed until Jan. 24, 2021 has been canceled.

An extension of the Ol’ Black Eyes Is Back Tour, the show was originally scheduled for June 17 with Tesla and Lita Ford before it was postponed due to the coronavirus pandemic. Extreme was set to open for Cooper on Jan. 24, but it is now officially canceled “in light of ongoing public health concerns.”

Refunds will be available at the original point of purchase. Tickets purchased will automatically be refunded from the ticketing company in approximately 30 days of receipt of email notification of the cancellation. For those who purchased tickets in person at the NBT Bank Box Office at Mohegan Sun Arena, click here. For any other ticket outlet purchases, visit the website of that outlet for refund policies.

On May 15, Cooper released a new single, “Don’t Give Up,” that offers hope during COVID-19. In an interview with KSHE 95, the Rock and Roll Hall of Famer talked about his inspiration for the song, which also has a music video featuring photos sent in by fans.

“I saw The [Rolling] Stones’ ‘[Living In A] Ghost Town’ thing, which is great — I think that’s one of the best songs they’ve ever done. And then I saw Johnny Depp and Jeff Beck [covering John Lennon’s classic track ‘Isolation’], and that’s very cool. And I said one point of view that has not come out yet is what about us talking back to this virus and telling it it’s limited — it has a short lifespan — and yeah, it’s dangerous but we’re not scared of it, and we’re gonna survive and it will not survive. It’s sort of like punching the bully in the nose and saying, ‘Hey, we’re tired of being victims, OK?’ And I think a lot of people like that attitude, because it gives them a sense of power over this virus.”

“When we wrote the song, the B section and the chorus, I think, really pay off, just saying, ‘We’re looking at the razor’s edge, but don’t step off the ledge; don’t give up,'” he continued. “I think a lot of that goes to people that just feel like, ‘I just can’t take this anymore.’ And you go, ‘No, no, no. You don’t get it. We’re beating this thing. Just hold on. We’re gonna win.’

“When I look at CNN, I only see the death toll — I never see the recovery toll,” he added. “Four percent of people die from this, and they’re usually dying because they had other things wrong — diabetes and things like that — whereas it should say also people recovering. It would be a huge number. And I think that that’s important to make people feel better. I don’t like the scare tactic.”

Alice Cooper pioneered a grandly theatrical brand of hard rock that was designed to shock. Drawing equally from horror movies, vaudeville, and garage rock, his group group created a stage show that featured electric chairs, guillotines, fake blood, and boa constrictors. He continues to tour regularly, performing shows worldwide with the dark and horror-themed theatrics that he’s best known for.

Cooper was born in Detroit, Michigan and moved to Phoenix, Arizona with his family. The Alice Cooper band formed while they were all in high school in Phoenix and was discovered in 1969 by Frank Zappa in Los Angeles, where he signed them to his record label. Their collaboration with young record producer Bob Ezrin led to the breakthrough third album “Love It to Death,” which hit the charts in 1971, followed by “Killer,” “School’s Out,” “Billion Dollar Babies,” and “Muscle of Love.”

Associated with that album and tour was the groundbreaking network TV special “Alice Cooper: The Nightmare.” Other film and television appearances include “The Muppet Show,” Mae West’s last film “Sextette,” “Roadie,” “Sgt. Pepper’s Lonely Hearts Club Band,” and appearances on “The Tonight Show starring Johnny Carson” and Tom Snyder’s “The Tomorrow Show.” The original band also made an appearance in the movie “Diary of a Mad Housewife” in 1979, filmed the full-length feature film “Good to See You Again, Alice Cooper,” and he appeared in a 1972 episode of “The Snoop Sisters.”

Cooper’s solo career skyrocketed in the late 1970s with a succession of hit singles, including “You & Me,” and classic albums, including “Lace and Whiskey” and “From the Inside,” with bigger and even more elaborate concert tours.

In the ‘80’s Cooper explored different sounds, highlighted by the new wavish album “Flush The Fashion,” the heavy metal “Constrictor” and “Raise Your Fist and Yell,” and then 1989’s melodic hard rock album “Trash,” which featured the massive hit single “Poison” and became his biggest-selling album and single worldwide. During this period, he also appeared in the horror films “Monster Dog” and “John Carpenter’s Prince of Darkness” and recorded songs for the soundtracks to “Roadie,” “Class of 1984,” “Friday the 13th Part VI: Jason Lives,” and “Wes Craven’s Shocker.”

1999 saw the release of the definitive historical four-CD box set “The Life and Crimes of Alice Cooper,” from Rhino/Warner Bros.

He also wrote and published a memoir, “Alice Cooper, Golf Monster,” in 2007, which tracked his life from childhood to rock stardom and his journey from alcoholic to golf addict. Cooper, guitarist Michael Bruce, bassist Dennis Dunaway, drummer Neal Smith, and guitarist Glen Buxton (posthumously) were inducted into the Rock and Roll Hall of Fame in March of 2011.

With his influence on rock ‘n’ roll long since acknowledged, there is little that Alice Cooper hasn’t achieved in his remarkable career, including platinum albums, sold-out tours, and any number of honors and career achievement awards.

As he heads back out on the concert trail each year, Cooper insists he’s still motivated to continue touring and recording albums, as well as making time for such side projects as Cooper’stown, his Phoenix-based restaurant/sports bar, and his “Nights with Alice Cooper” nightly radio show, syndicated domestically and worldwide on over 100 stations.