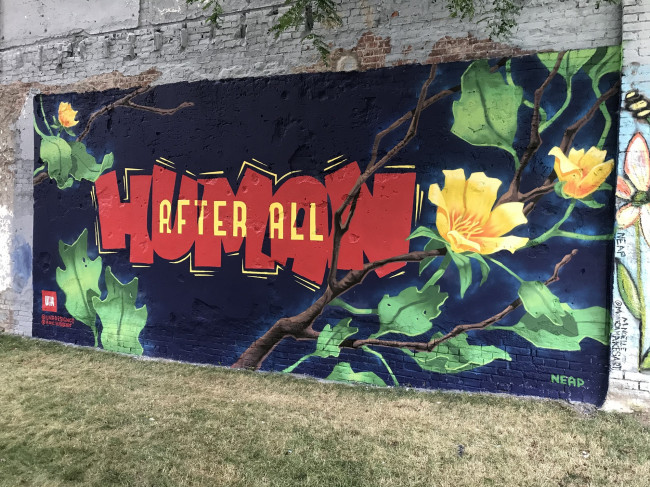 Locals who have driven on Adams Avenue in downtown Scranton over the past week may have noticed a new mural on the side of The Leonard Theater building. With bright typography that reads “Human, After All” and imagery of poplar leaves and flowers, the social justice artwork was completed on Sunday, July 19 by artists Eric Bussart and Emmanuel Wisdom. The mural was coordinated by the Northeast Art Project with the permission of building owner Admiral Management, LLC.

“The idea behind the mural is to promote unity, education, human connection, as well as promote a positive call to action. The mural tells the story of brutality towards African Americans in the U.S., especially down South, heavily inspired by Nina Simone’s ‘Strange Fruit’ song and historical events. Our hope is that the mural educates as well as provokes thoughts that challenge our current norm and our interaction with one another or a specific group of people,” Wisdom said.

“The mural illustrates the human connection to one another and promotes a positive call to action. The typography and shapes are designed purposely to reflect the abstract connection in the human race. … [The] typography is purposely designed in uppercase to represent the boldness of the statement. Letter shapes mimic the surroundings (buildings, etc.). The overall type design illustrates the complexity (interlocking with one another) of human society.”

Bussart, who recently completed another mural featuring an American flag and a West Scranton Invaders football player on the side of Catalano’s, an Italian market in Scranton, further described the meaning behind The Leonard mural, which is located just a few blocks away from where the recent Black Lives Matter protests have been held on Courthouse Square.

“We wanted to create a mural that would inspire togetherness in these polarizing times. The gorgeous lettering centerpiece inspires a message of hope and unity, while the background elements carry a more somber connotation. The poplar trees depicted in this design draw inspiration from the heart-wrenching classic rendition of ‘Strange Fruit’ by Nina Simone. The song depicts the horrors of a post-slavery America. With powerful poetic imagery, she depicts the victims of lynching as ‘Strange Fruit’ hanging from ‘poplar trees.’ By using the imagery of the poplar tree leaves and flowers, we are drawing a parallel between the unjust murder of African Americans by police to the lynch mobs of the distant past. This subtle use of iconography gives a greater historical context to the plight of African Americans in this country without depicting morbid subject matter outright,” he explained.

“When creating public art, it is of the utmost importance that one considers the entire viewing audience of a piece, puts care and tenderness into the execution, and produces a beautiful end result. With all these factors in mind, we set out to create a visually striking and thought-provoking mural for this wall in downtown Scranton. We believe that mural art is immensely important for any community, both as a way to improve quality of life and a vehicle to inspire positive change.”

This mural was coordinated by Ryan Hnat, owner of the Northeast Art Project. NEAP has a goal of coordinating with property owners and collaborating with artists to create murals and public art in Northeastern Pennsylvania. To date, NEAP has coordinated several murals around downtown Scranton, including the “Scranton” mural on the side of Levels Bar & Grill on Linden Street, the black-and-white mural on the Scranton Art Haus movie theater on Lackawanna Avenue, a storefront inside The Marketplace at Steamtown, the bridges along the Lackawanna River Heritage Trail, and several others.

“The timing of this mural is significant,” Hnat said. “Art is a reflection of what is happening in society and has the ability to be a catalyst for change.”

There will be mural unveiling for this project on Saturday, Aug. 1 at 11 a.m. For more information, email admin@northeastartproject.com or follow the Northeast Art Project on Instagram and Facebook.

Learn more about local art and the early formation of the Northeast Art Project from Hnat in Episode 37 of the NEPA Scene Podcast: 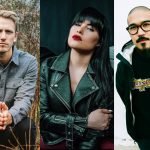