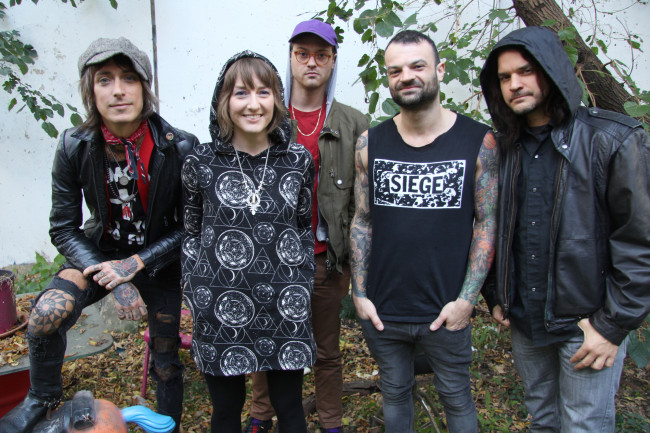 This week, Wilkes-Barre psyche-noise/avant-punk band An Albatross is back after a 12-year hiatus with “Return of the Lazer Viking,” a two-song EP featuring the title track and the B-side “Mort Bleu” that is available now on all streaming services.

In the same bombastic and relentless spirit of the band’s early 2000s Ace Fu Records/Gold Standard Laboratories days, An Albatross self-describes the EP as “total splatter – futuristic psychedelic soul prog for the new century,” featuring a title that recalls their 2003 EP “We Are the Lazer Viking” and cover artwork by Elzo Durt from Brussels, Belgium.

Lyrics for the title song were written in 2017 by vocalist Edward B. Gieda III and his late wife, Amanda Medina, to whom the EP is lovingly devoted in memory. The chaotic track foreshadows today’s upheaval and demand for justice and equality.

Now based in Philadelphia, An Albatross is Gieda, bassist Jay Hudak, percussionist Steven Vaiani, Kat Paffett on keyboards, guitarist Harry Lannon, and Bubba Ayoub on modular synthesizers and visual projections. The EP was recorded over a two-year period under the meticulous supervision of Dan Kishbaugh and Jay Hudak at Panther Pro Audio and Creep Records Studios in Fishtown, Philadelphia and mastered by Alan Douches at West West Side Music in Cornwall-on-Hudson, New York. Additional field recordings are from Belfort, France and Jaipur, India.

The band released this EP on Wednesday, July 15 as a “thank you to our loved ones and our fans that have given us love and support for 21 years.” This marks their first new material since their 2008 full-length “The An Albatross Family Album,” and all proceeds from “Mort Bleu” will be donated to Black Lives Matter Philadelphia.

“Could there be a more appropriate year for An Albatross’ first release since ’08? Hell no!” the group posted on Facebook.

All of their recordings are available now on Bandcamp:

An Albatross formed in Wilkes-Barre in 1999 and quickly became known for their wild live shows at places like Cafe Metro. In a 2009 interview, Gieda told Noisecreep that the “very gritty, and very real” town helped shape the band and their rebellious sound. At the time, they also kept a practice space in Wilkes-Barre, as three members still lived there after Gieda moved to Philadelphia.

“We all grew up in that context with old coal breakers, factories, and everything turning to rust and going to shit. I really think growing up there had a weird ‘Twin Peaks’-ian thing going on up there.”

To understand just how secluded of a pre-Internet history Wilkes-Barre has Gieda explains, “Wilkes-Barre was a place in the early ’80s that was deemed so geographically isolated on the East Coast that they used it for marketing advantages for television companies like HBO and what not. That was first tested in that area because they knew that the people that lived there were so isolated, nestled in this valley in the middle of Appalachia.”

Growing up in a working class area such as this still influences and guides Gieda in all aspects of his life, even with not living there anymore. “My grandfather was someone who was 11 years old and working in coal mines. That is something of a humble and appreciative and sort of proletarian outlook on life that has defiantly inspired me in many ways,” says Gieda. “It has helped me formulate political opinions and musical opinions aiding in my creative side.” On the last An Albatross album Gieda has said he created homage or sorts on “what it was like to live there, and grow up making art and music there.”

After many lineup changes, world tours, and hiatuses over the years, they reunited in 2016 for Philly shows with Daughters and Dead Milkmen, which spawned a string of regional and East Coast dates, including an appearance at the 2017 Pop Montreal International Music Festival. In 2018, they performed in New York City and toured Europe while working on new music.

In February of 2020, Philadelphia Magazine conducted an interview with Gieda about how he has used running to deal with the loss of his wife, who died in a motor vehicle accident. In 2019, he ran 10 full marathons to honor her memory.

“Among other things, we bonded over running and yoga. Amanda was a yogi and actively taught in Philadelphia since a very young age. I began running back in the ’90s as a means to keep myself fit as a frontman for my band, An Albatross. The rigors of a relentless touring schedule and playing high-intensity sets night after night for months required some attention to my physical form. Running fit the bill. The times she joined me on tour, we’d run together in every city my band played, and practice yoga too. Typically, it was marathon training and yoga studios by day, concerts and dancing by night. She even devised a specific yogic strategy to get me back on my feet after I ran myself into an injury with a compressed nerve in my back in 2017. A few short months later, I was running the NJ Marathon,” he explained.

“Running is an opportunity to appreciate the present moment. I, like so many others, operated on the false assumption that my comfortable life would replicate itself daily. It was a foolhardy way of thinking. At best, our loved ones, our possessions, our careers, our very bodies are interest loans from a higher source. Both Amanda’s passing and running have shifted my perspective toward total gratitude of the now.”

With “Return of the Lazer Viking,” Gieda has found another way to remember her.