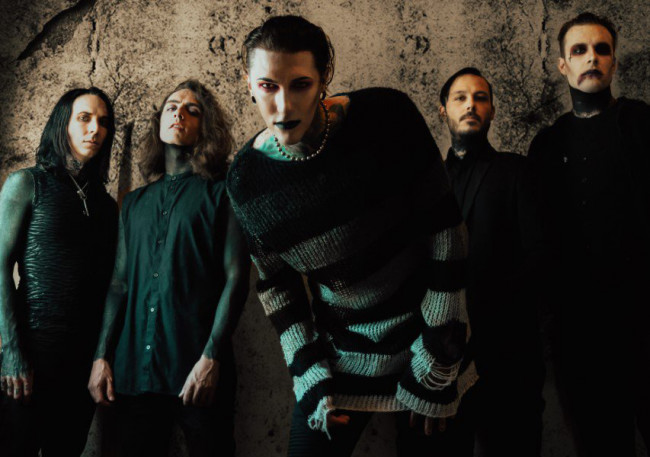 Scranton metal band Motionless In White has become increasingly experimental over the years, with songs influenced by metalcore, industrial, nu metal, and other heavy genres. They’ve also made some acoustic versions and remixed tracks here and there, but their new EP goes the extra mile in reinterpreting previously released songs.

“Eternally Yours” and “Another Life,” singles from the band’s first two studio albums on Roadrunner Records, 2017’s “Graveyard Shift” and 2019’s “Disguise,” respectively, are now duets with American/Australian dark pop solo artist Crystal Joilena and Estonian alternative pop singer/songwriter Kerli, both surrounded by atmospheric strings and piano. The two tracks sound like they belong in a movie and include B-side instrumental versions as well, so this quarantine project released today has been dubbed the “Motion Picture Collection.”

“With all of the downtime of not touring, we wanted to take the opportunity to try something we’ve never done before. We give you ‘Eternally Yours: Motion Picture Collection’ (feat. Crystal Joilena) and ‘Another Life: Motion Picture Collection’ (feat. Kerli). Thank you to Crystal and Kerli for your amazing vocals that helped transform these versions into something truly special. Thank you to Justin Deblieck for your ever-brilliant talents that shine so bright throughout these tracks, and thank you to Steve Sopchack for your keen ear and dedication to mixing this project. We hope you all enjoy and are still staying safe out there,” MIW posted on social media.

“Just received the final mixes for two projects we are releasing this summer. I can’t wait for you to hear,” vocalist Chris “Motionless” Cerulli tweeted on July 10. “All I’m going to say is… you should stock up on some Kleenex now ahead of time.”

The “Another Life” music video has also been reworked, editing out the band and focusing on the tragic love story of the original video, which has racked up over 9.5 million views since December:

Released on June 7, 2019, Motionless In White’s latest full-length album, “Disguise,” debuted at No. 4 on Billboard’s Top Album Sales chart while also claiming No. 2 on the Hard Rock Albums chart and No. 27 on the Billboard 200. This marked their third consecutive Top 30 entry on the Billboard 200, highlighted by the singles “Brand New Numb,” “Undead Ahead 2: The Tale of the Midnight Ride,” and “Disguise.”

“Disguise” is the band’s fifth studio album and second for Roadrunner Records, a division of Warner Music Group that is currently home to major national acts like Slipknot, Stone Sour, Korn, Coheed and Cambria, and Slash. MIW celebrated the release with their hometown fans in Wilkes-Barre at a sold-out listening party at the F.M. Kirby Center and a meet and greet at the Gallery of Sound last year.

“We’re a band that came out of the small-town, blue-collar spirit,” Cerulli said. “Both the area we come from and the fan base brought us to this point.”

These local appearances came a little over five months after the band sold out Levels in downtown Scranton on Dec. 22, 2018, their first hometown club show in nearly 10 years. During the concert, they were joined by fill-in bassist Justin Morrow, who later left Ice Nine Kills to join MIW full time.

On May 1, 2020, they released a remix of “Another Life” by Caleb Shomo, the vocalist of hardcore punk band Beartooth:

Since 2006, Motionless In White has won over audiences around the globe with their aggressive music and arresting imagery, rapidly rising to the upper echelon of modern rock. Albums such as 2010’s “Creatures” and 2012’s “Infamous” would galvanize a rabid fan base around the band, currently comprised of lead singer Chris Motionless, guitarists Ryan Sitkowski and Ricky Horror, drummer Vinny Mauro, and bassist Justin Morrow.

Their 2014 LP, “Reincarnate,” reached new heights, bowing at No. 9 on the Billboard Top 200 and claiming No. 1 on Billboard’s Hard Rock Albums chart. “Graveyard Shift” arrived in 2017 to critical acclaim, once again topping Billboard’s Hard Rock Albums chart led by the Top 20 Active Rock hit “Loud (Fuck It),” as well as the thunderous singles “Eternally Yours” and “Necessary Evil.”

We show the world what we want the world to see. Expressions enshroud our emotions. Countenances conceal our concessions. As a result, truth only slips out in slivers and shards. Motionless In White withdraw any and all veils on “Disguise” – the Scranton quintet holds nothing back.

Unencumbered and unfettered, they uncover their heaviest and most hypnotic body of work to date.

“We really aimed to write a serious record and wear our hearts on our sleeves,” Chris Motionless exclaimed. “I don’t talk about things online or in public. Instead, I use our lyrics as a way to express what’s going on in my life and my feelings. Things have been great for us on the exterior, but there’s so much we had to work through together and personally behind the scenes. Everything comes out on ‘Disguise.’ I tried to give fans a look behind the mask and let them know what I’m dealing with on the inside as well as what they know of me on the outside.”

Many listeners initially fell under the band’s spell in 2006. A pair of albums – “Creatures” (2010) and “Infamous” (2012) – sent shockwaves throughout the culture with a combination of big screen-worthy imagery and incisive songcraft. 2014’s “Reincarnate” crashed the Top 10 of the Billboard Top 200 at No. 9 and clutched No. 1 on the Top Rock Albums chart. The title track emerged as a signature staple, going Top 20 on Active Rock radio and racking up over 20 million Spotify streams.

2017 saw “Graveyard Shift” accelerate their ascension. Not only did the album claim real estate in the Top 30 of the Top 200, but it also produced a string of undeniable anthems. Tallying over 60 million cumulative Spotify streams, “Eternally Yours” crossed the 15 million mark as “570,” “Loud (Fuck It),” “Voices,” and “Necessary Evil” (featuring Jonathan Davis of Korn) all broke eight million. Alternative Press named the video for the latter “one of the best music videos of 2017.” Additionally, Alternative Press bestowed an “A” score on the record and described it as the “best representation of Motionless In White.” Further critical acclaim came from Kerrang!, Rock Sound, Metal Injection, and many more. As a live force, the band packed venues for headline tours and supported the likes of Slipknot, Korn, Marilyn Manson, and Wilkes-Barre’s own Breaking Benjamin, to name a few.

“Fans really responded to ‘Graveyard Shift’s’ ‘Voices’,” the frontman went on. “I try to listen to what they like and what they don’t like. I recognized a common thread where they really love lyrics that represent personal struggles and triumphs. They clung to this one in particular, so it made me more comfortable with opening up about myself.”