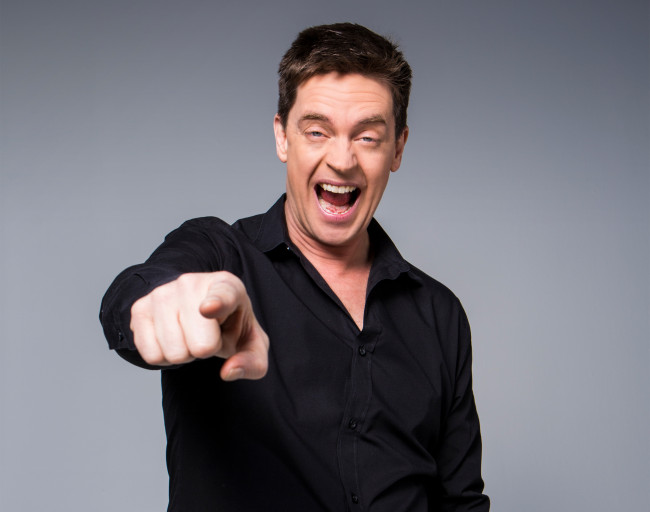 It was announced this week that comedian, actor, author, and singer Jim Breuer will perform stand-up live at the Circle Drive-In Theatre in Dickson City on Saturday, Sept. 26.

Presented locally by Stage West in Scranton and SLP Concerts, the show will be part of Breuer’s The New Normal Tour, stopping at drive-ins and outdoor amphitheaters across the country.

Gates at the Circle Drive-In (1911 Scranton/Carbondale Hwy., Dickson City) open at 6 p.m., and the all-ages show starts at 8 p.m. Tickets, which are $150 per vehicle for general admission (up to four guests max) and $200 per vehicle for Gold Circle parking close to the stage (up to four guests max), go on sale this Saturday, Aug. 29 at 10 a.m. on ticketmaster.com, though tickets can be purchased now using the pre-sale code “SLP2020.”

Not long after Jim Breuer did his first official stand-up gig in Clearwater, Florida in 1989, industry folks began asking him, “What’s your point of view?” “I don’t know…” He searched for a meaningful response to a ridiculous question. “To make people laugh?”

The freewheeling, New York-bred comic storyteller – who made the list of Comedy Central’s “100 Greatest Standups of All Time” – is hotter than ever, a global touring sensation and regular presence on radio and television whose rabid audience, he’s thrilled to note, is filled with “lifetimers.” Once folks see him live, they’re hooked. Breuer estimates that 78 percent of his fans have seen him “five, six, seven” times. It’s becoming a family thing, with parents even bringing young teens to see the family man and father of three daughters, all providing genius “dad” material for his sets. Having evolved both personally and professionally since the beginning, Breuer’s pleased to say he’s been F-word free for 10 years and counting.

Breuer came to national attention during his seasons on NBC’s “Saturday Night Live.” (1995-98), a rebuilding era whose cast featured Will Ferrell, David Spade, and Norm McDonald. But don’t call him “Goat Boy” (one of his characters on “SNL”) or ask him to do his Joe Pesci impression. Those things are eons ago. Some even still associate him with “Half Baked,” a stoner comedy flick from around that time that starred Dave Chappelle and featured cameos by Willie Nelson, Snoop Dogg, and Tommy Chong.

The fans who got into Breuer in the new millennium were drawn into his whirlwind journey through his Comedy Central specials such as “Hardcore” (2002) and “Let’s Clear The Air” (2009), one of the highest-rated comedy specials in the network’s history – popularly known as his “coming out party” as a dad, cleaning up his act, and focusing on the fun and foibles of family life. His next special, “And Laughter for All” (2013), became the highest rated original comedy special on Epix to date, earning its spot as a family favorite for its relatable and multi-generational humor. His latest special, “Comic Frenzy” (2015), is currently available on Amazon Prime.

Many of Breuer’s newer fans know him from the multitude of hilarious hours he’s spent as a guest on Sirius XM’s “The Howard Stern Show.” Stern’s hosted some of pop culture’s biggest comedy icons over the past 30 years, yet Breuer gets people telling him he’s their favorite guest ever.

“Howard’s audiences know comedy,” he says. “If they come and I’m not funny, they’re not coming back.”

That’s never happened and never going to. Breuer was also the host of “Fridays with Jim Breuer” Sirius XM, originally known as “Breuer Unleashed.” He currently hosts a podcast called “The Jim Breuer Podcast,” which is available on iTunes and jimbeuer.com.

Over the years, Breuer has been something of a multimedia sensation, currently appearing alongside Kevin James on “Kevin Can Wait” on CBS as well as the popular films “Zookeeper,” “Dick,” “Titan A.E.,” and “Beer League;” hosting MTV’s popular “Beach House” and VH1’s “Web Junk 20;” and being featured on “Comedy Jam,” “This Is Not Happening,” “Late Night with Conan O’Brien,” “The Daily Show with Jon Stewart,” “The Late Late Show with Craig Ferguson,” “Jimmy Kimmel Live,” “Late Night with Jimmy Fallon,” and “The Marriage Ref.”

Since 2015, he’s shared his dual passions for comedy and baseball (particularly his New York Mets) with thousands via his video recaps of games that he posts on Facebook. Their viral impact has been massive, with clips airing on the MLB Network and ESPN Sportscenter among others, and even inspiring Mets fans in other cities to hang with Breuer to root their team on. A diehard metalhead, Breuer made his musical debut, “Songs from the Garage,” in 2016. Produced by Rob Caggiano (Anthrax, Volbeat), the album features tracks such as “Raising Teenage Girls,” the throwback anthem “Old School,” and “Mr. Rock n’ Roll” with the one and only Brian Johnson of AC/DC.

All Breuer aficionados know that family is everything to him, and his mission is to share the highs and lows, find the humor in the day to day, laughing with the triumphs and tragedies, and using comedy as a tool to conquer fear – as he did when posting videos of his wife going through cancer treatments the past few years. In 2008, Breuer set out for his Breuniversity Tour with his 85-year-old father and a film crew. The footage that was captured blended together to create “The Jim Breuer Road Journals,” which showcased what life is like on the road with a comedian and his father. Videos from that tour also sparked the making of his documentary “More Than Me,” which was shown at the 2009 Montreal Film Festival. In line with his love of family, “Comic Frenzy” focused on what Breuer’s life (and all our lives) truly consist of: dealing with the elderly, becoming our parents’ caretakers, and what it takes to be a “marriage warrior.”

“I’m a deep-rooted family guy with hardcore blue collar roots,” he says. “My father was a World War II vet and my mom lost her first husband to WWII. As a child growing up in Valley Stream, New York, I lived in low income housing, then an attic apartment, to eventually moving down the street into a home of our own, always surrounded by faith and love. My career reached a new level when I started to raise a family of my own and realized I should stick to what I know, what everyone could relate to no matter their socio-economic status. My oldest daughter just went to college and we’ve dealt these past few years with mortality issues, and I’m just there to find the funny in that. It all started with ‘Let’s Clear the Air,’ which focused on me being a new father who came from another world and who wasn’t prepared for the responsibilities at all.”

The crazy state of the world today made Breuer’s 2018 tour Jim Breuer Live all the more essential, as we seek perspective and comic relief from the day to day insanity that drives our 24/7 news cycle and social media. Breuer’s set was decidedly nonpolitical, but he had much to impart about the foolishness of ruining our lives over media-generated frenzies that we have no control over.

“My huge focus is, listen, stop getting caught up in the hoopla the news, politics, and all that jazz,” he says. “If every day you wake up and you’re watching five to six hours of it, it starts to darken your soul. If you spent even ten percent of that time on your wife, husband, child, or someone else you love, your personal life would get better and you could help so many people. I’m here to say that life isn’t that horrendous. Can you still eat? Can you still watch your 60-inch plasma TV? Call me when you have to eat a squirrel for breakfast, OK? Do something you can control that’s good because you can’t fight hate with more hate. Let’s concentrate on the most important things in life.”

“My job as a comic is to talk about the many great loves of my life, recognizing that, yes, we are all on borrowed time but we can still enjoy life with a passion and not get caught up in all the madness,” Breuer adds.

“There are always things that can become an obstacle to our happiness, and the big three for me that I smack into most are divisions in the family, financial struggles, and health issues. For me, there’s no better feeling in the world than making someone laugh and knowing that I’ve inspired or healed someone. It’s nice when people tell me I’m funny, but the ones that keep me going are the ones who come up to me and say, ‘Can I just tell you, I just lost my mom, and you healed me. That’s the first time I’ve laughed in ages.’ Or ‘My wife and I were fighting, we just experienced death. We knew seeing you was going to help. Thank you. We needed this so much.’ We’re not here for very long, and we’re all stuck here together. Everybody needs to laugh and be uplifted. We’re here to take care of others. I’m on a mission to lift you in the only way I know how.” 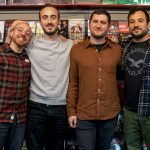