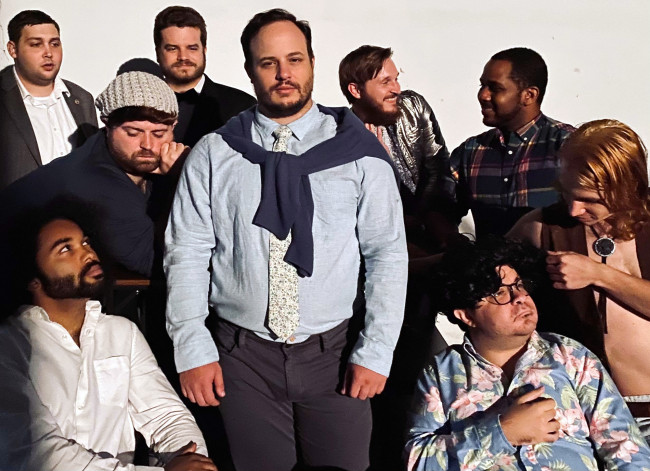 Act Out Theatre Group will present the Tony Award-winning play “The Boys in the Band” on Friday, Oct. 9 through Sunday, Oct 11 at locations in Luzerne and Lackawanna counties.

“In an effort to provide a safe environment for our audience members, as well as our cast, we once again looked to perform at an outdoor venue,” said Dan Pittman, artistic director of the group. The Dunmore-based theater recently closed on the musical “Children of Eden” at the Slope Amphitheater in Pittston.

“Pittston officials were so welcoming, and the amphitheater is such a great venue; we knew we wanted to return,” Pittman, a Plymouth resident, continued.

“The Boys in the Band” will take place at the new Slope Amphitheater behind the Pittston Memorial Library on Saturday, Oct. 10 and Sunday, Oct. 11. The production centers around a group of gay men who gather for a birthday party, exploring the backgrounds and relationships of the men. The original groundbreaking play premiered off-Broadway in 1968 and was adapted into a film directed by William Friedkin in 1970, which is often cited as a milestone in the history of LGBTQ cinema. The play was revived on Broadway in 2018 for its 50th anniversary, and a Netflix movie adaptation featuring that cast was introduced to audiences just last month.

Kalen Churcher of Plymouth is the show’s director.

“It’s been an absolute pleasure directing this show,” Churcher said. “Although the play was originally set in the 1960s, we’ve situated things in more modern times, but still stay very true to the original messages and undertones. The characters certainly explore their sexuality but also issues of racism, anti-Semitism, and classism.”

“The material is definitely still relevant, even more than 50 years after it first appeared on stage,” Churcher continued. “Of course, some things have changed, but many things have remained the same.”

Bubul said he enjoys having the opportunity to perform at a time when many theaters have postponed productions.

“Writing or performing on live stream events offered some creative outlet, but so much of performing is about interaction with your fellow castmates and production team as well as with the audiences,” Bubul explained.

“That is impossible to do virtually. I feel very lucky to be able to have the opportunity to safely do what I love in this constantly developing new normal.”

Because Pittston had another event planned for Friday, Oct. 9, Pittman explored other options. Nay Aug Park in Scranton is just minutes away from the Act Out Theatre Group stage in Dunmore.

“We’re excited to be performing on Friday under one of Nay Aug’s pavilions,” Pittman said. “Being able to offer the show so close to our brick and mortar location is great. We’re looking forward to building a relationship with the park.”

The production also coincides with National Coming Out Day on Oct. 11, and Act Out has started a Diversity Initiative Scholarship Fund to increase diversity on its stage.

“The Boys in the Band” runs at Nay Aug Park (500 Arthur Ave., Scranton) under the pavilion near the pool on Friday, Oct. 9 at 7 p.m., then at the Slope Amphitheater (47 Broad St., Pittston) on Saturday, Oct. 10 and Sunday, Oct. 11 at 7 p.m. Tickets, which are $10, can be purchased in advance at actouttheatre.com or by e-mailing actouttheatre1@gmail.com. Due to COVID-19 restrictions, audience sizes are limited and everyone in attendance is urged to maintain social distancing and wear a mask during the show. For a full list of safety precautions, visit actouttheatre.com.

Following this show, Act Out is expanding to include performing and fine arts classes. The first session begins in November.