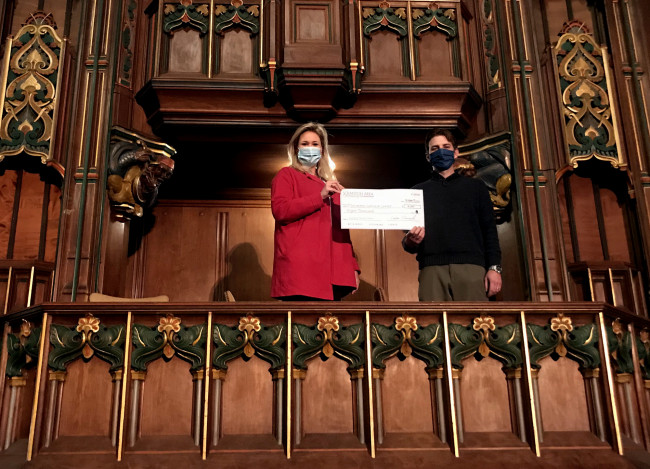 Today, the Scranton Cultural Center at the Masonic Temple announced that it received an $8,000 Community Needs Grant from the Scranton Area Community Foundation to assist with repairs to the Harry and Jeanette Weinberg Theatre.

“We are grateful to the SACF for this Community Needs Grant which helped to support us financially with this unanticipated expense.”

The emergency repairs, which were completed in January, addressed a drainage issue within the building’s original 1930s plumbing system that caused damage to the theatre walls. As a result, a portion of the ornate plaster cornice began to deteriorate. Temporary plumbing repairs were completed to divert the water appropriately, the damaged plaster cornice was removed and covered, and the wall was painted.

Plans are underway for a complete restoration of the theater within the next five to six years.

With the coronavirus pandemic canceling events or postponing them until 2021, the Scranton Cultural Center has been hosting shows online, such as the free Virtual Underground Microphone that features local artists performing live from the Raymond Hood Room in the lower level of the Masonic Temple. It streams on Facebook Live and YouTube on Tuesday nights from 7 p.m.-8 p.m.

Grammy-nominated songwriter and piano sensation Jim Brickman will also play a virtual Christmas concert on Sunday, Nov. 29, with proceeds benefiting the venue. Tickets are on sale now at jimbrickman.com.

This year marks the 90th anniversary of the opening of Scranton’s historic Masonic Temple, which has served as the home of the Scranton Cultural Center for over three decades, so the organization has been celebrating this monumental milestone online through social media.

“Before the pandemic outbreak, we were brainstorming ideas for an on-site celebration because we believe our building doesn’t just belong to us, but the entire community,” Peterson said.

The virtual 90th anniversary celebration kicked off on May 18, which marked the official anniversary of the building’s opening in 1930.