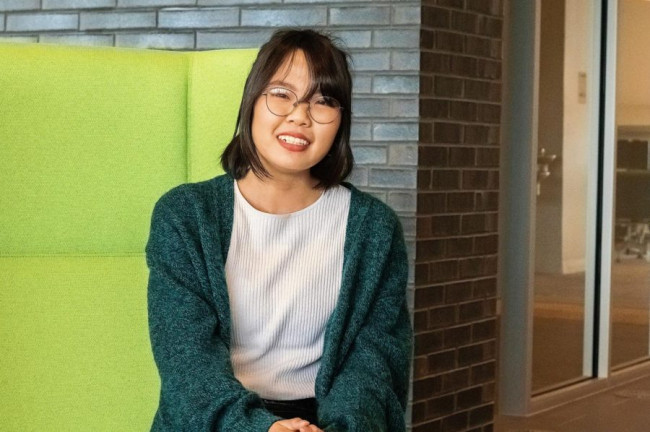 The documentary features the story of Nguyen’s mother, Thao Thi Pham, and her journey from Vietnam to America in search for a better life. Pham was born during the start of the Vietnam War. She and her eight siblings survived by selling livestock. Nguyen’s uncle came to America first and earned enough money for the rest of the family to safely get to the United States. The six-minute documentary follows her mother’s entire life journey.

“I intended this film to reach out to other families from other countries who are faced with discrimination and who are looking for opportunities for a better life. It must have an exhausting impact on a person – on their mental health. For instance, my grandparents have always been very logical – survival first and emotions later. This film gave my mother the opportunity to open up for the first time. I hope, as a result of the film, that people will practice patience and understanding with those who are searching for a better life,” Nguyen said.

In addition to pursuing her education, the young Scranton resident works as a multimedia assistant at The Wood Word, Marywood University’s student-run electronic newspaper. Further, she is a member of TV-Marywood, the Public Relations Student Society of America, the Society of Collegiate Journalists, and she works as a wedding videographer and editor, work that she will continue following graduation.

As an aspiring filmmaker, Nguyen said, “Marywood taught me how to use its resources and tools to draw out my potential. It’s why I chose Marywood when I was searching for colleges. I liked the versatility of production and that I could learn about journalism, public relations, advertising, and then work all of those skill sets into the focus of film.”

The College Media Association serves student media pros, staff, and programs with education, research, and resources. The CMA communicates and works with professional media organizations and education associations on the local, state, and national levels. The Film and Audio Festival is designed to encourage and promote excellence in student video work by showing examples of top-notch projects in several categories. Submitted works for the CMA fall festival are completely produced by college students, and all works were completed after Nov. 2, 2019.