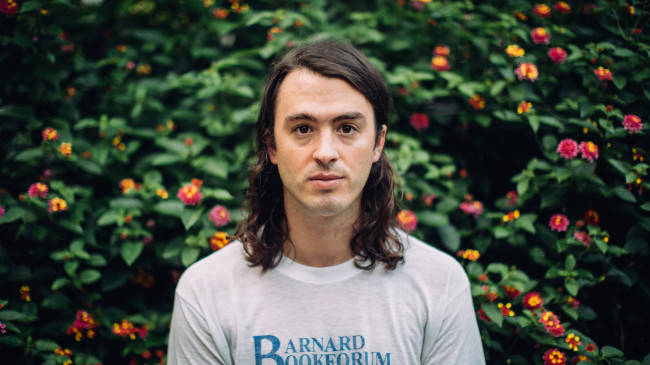 Glitterer, the post-punk solo project of Title Fight bassist/vocalist Ned Russin, has announced that his sophomore LP, “Life Is Not a Lesson,” will be released on Feb. 26, 2021 via Anti- Records.

The first single, “Are You Sure,” debuted on Dec. 9 with a music video directed by his twin brother Ben Russin, who played drums on this song as well as in Title Fight, the Kingston punk/shoegaze band that rose from local favorites to international fame with three acclaimed studio albums.

“The major theme in ‘Life Is Not a Lesson’ is desire,” Ned Russin explained.

Lyrically, as with the prior album, many of the songs on “Life Is Not a Lesson” are short, dialectical considerations of the countless daily miniature panic attacks that attend the rigorously examined life. For example, the lyrics of “Are You Sure” – “Feel it in my spine / Certainty is mine / Are you sure?” – combines the tension-building properties of Guided by Voices’ “Hot Freaks” with the tension-resolving blast of something like The Pixies’ “Gouge Away.” The album proves to be a rigorous reckoning with the life of the mind at a time when there’s not much life outside the mind.

“Looking Through the Shades” was recorded and co-produced by Arthur Rizk (Code Orange, Power Trip), but this time, Russin has produced the record himself, notwithstanding some recording and performance help from his brother Ben. Irrespective of worldly doom and gloom, the new songs are even catchier and bigger-sounding than his debut material. With roomier drums recorded by Colin Gorman in Kingston and more electric-guitars-per-square-inch than ever, “Life Is Not a Lesson” has a way of evoking an alternate universe version of GBV, one with a hardcore punk background. And if there was, perhaps, an indirect or “meta” aspect to the pop appeal of Glitterer’s older records, there’s essentially none of that here – this is Glitterer’s most insistently and proudly accessible work.

“Life Is Not a Lesson” tracklist:

We all know what has happened since because of the coronavirus pandemic – across-the-board erasure of every single presupposition and condition-to-be-taken-for-granted. A sudden and comprehensive blanking of the slate. A whole new world and a whole new metaphysical terrain. And into this new context of no context comes the second Glitterer full-length, “Life Is Not a Lesson.”

While self-produced, he had some help from his brother as well as mixing and mastering by Rizk. Following “Are You Sure,” another single called “Didn’t Want It” is a slowed-down, fuzzed-out invocation of Sebadoh’s driving infectiousness circa “Bakesale” and an unsentimental ode to abandoned ambitions (“Didn’t want to want it all / Found a word, made me feel small … Didn’t want it / Did I now?”).

Country icon Martina McBride returns to F.M. Kirby Center in Wilkes-Barre on May 1
NEPA Philharmonic performs live for first time in a year on April 22 in Wilkes-Barre