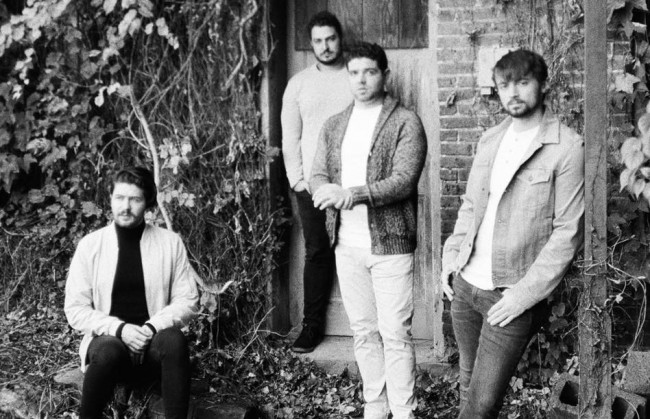 With slick production, teen magazine good looks, and the kind of mainstream appeal that many artists wish they had, Modern Ties may seem like the kind of band that would be driven by egos and fake personalities, but that couldn’t be further from the truth.

When we had the opportunity to sit down with the Scranton-based indie pop rock quartet on the NEPA Scene Podcast in August, the guys cracked open a few beers, knocked back a few shots, and put it all out there in an honest and funny interview that went well over the scheduled time because they’re genuine friends having a real good time doing what they love. They had just finished a private set for University of Scranton students tuning into The V-Spot in Scranton virtually as the bar remained closed to the public, a venue that they typically pack to capacity with the dedicated following they have for their original work as well as their cover band alter ego, Black Tie Stereo.

It’s just a sign of these strange times for the music and entertainment business, and it’s even weirder to introduce a new album to the public that they can’t promote in many of the traditional ways due to the coronavirus pandemic, but it’s been a long enough wait and “Moments/Missed Opportunities” can’t be held back any longer.

“The strangest thing is just how long ago we ‘finished’ the album, and how much goes into the promotion and release of it. We were planning to release in June and have new songs already out by now, but COVID made us dial it back a few notches and save up some more money before we can do that,” vocalist/synth player Stephen Murphy said.

“We finished all the recording in September 2019, so we’ve been living with it for a while. It will definitely feel good to move forward, but also refreshing to hear the reactions of other people listening to us for the first time. We’re definitely ready for that new perspective on these songs.”

All year, they’ve been releasing singles one by one, and each potential radio hit has led to “Ghost,” the heartbreaking final track on the album that is premiering today exclusively on NEPA Scene. Preceded by so many upbeat, danceable love songs, this one shows a more melancholy side to the band, which features George Pachucy on drums, Aaron Kovalich on bass, and Jesse Morvan on guitar.

“‘Ghost’ is about reflecting on a loss that will stay with you for the rest of your life. It’s about a relationship that changed you, for better or worse, and sort of putting yourself in the shoes of an older person looking back on that time. Like most of the album, this was inspired by an emotion – in this case sadness – that one of us was feeling, and we just took it from there,” Murphy explained.

With those emotions excised, they can now focus on their debut release as Modern Ties, which hits all major streaming platforms today. While they had released music under the Black Tie Stereo moniker before, this is the material they’re moving forward with after rebranding in January.

“This album is the first total writing collaboration between all four of us and also marks a lot of progress in finding our writing style and sound. That’s also one of the reasons why we started the project with the launch of these songs – we felt that this progress made as songwriters and producers deserved its own fresh start. Also, each song is written about a personal experience one or more of us has had, so sharing those experiences in song has been very cathartic for us,” Murphy emphasized.

“We’re currently locked in a four-way tie; each of us has a different favorite. ‘Outside the Lines’ because it’s super uptempo, catchy, and great to perform; ‘Supernatural’ because it’s definitely the most feelgood song on the album; ‘Downtown’ because it was a pretty collaborative writing process and seems like the best representation of all of our styles; and ‘Ghost’ because everyone loves an epic emotional album closer,” he listed, noting that “Outside the Lines” seems to be the most popular tune among fans.

“‘Outside the Lines’ definitely has gained the most popularity online, and it’s definitely a crowd favorite when we play live; it’s so easy to get into playing it. It’s very upbeat and easy to sing along to the hook, and a hell of a lot of fun to listen to.”

Since the podcast, the boys have been planning plenty of new online content with local creative marketing team Ionic Development, who have produced all of their music videos pre- and post-pandemic, including their latest quarantine-style video for “Downtown.”

“Our initial idea for ‘Downtown’ involved an actor walking through crowds of people in NYC while lip-syncing the song. Obviously, once COVID hit, there were no crowds so we had to pivot. Getting everyone to submit their own videos was an idea for a separate sort of promo video, but we liked the idea in quarantine so much that we went for it for the full release,” Murphy said.

“We asked a handful of people to perform, Ionic Development edited it together, and we premiered it just as new waves of infections forced people back home. We really love the video and what it means for everyone to feel involved in the performance even when there isn’t live music.”

Their collaborations with Ionic have led to them becoming good friends, calling them “the coal that stokes our fire and the wind beneath our sails” in a recent Facebook post that shows they’re just as appreciative of those cheering them on publicly as they are of those working behind the scenes to hopefully make them a national success. They will all get together at The V-Spot again for an extended entry in Ionic’s Juicebox Sessions series on Wednesday, Dec. 23 at 8 p.m. The free concert, which will celebrate the release of “Moments/Missed Opportunities” and include requested covers and other crowd favorites, will stream live on the NEPA Scene, Juicebox Sessions, and TheVspot Bar Facebook pages as well as Ionic’s YouTube channel and Juicebox Sessions on Twitch, where fans can interact with the band and have their questions and comments addressed in real time.

“[Live streams have] certainly makes us more aware of our playing, since you’re so exposed with a direct input. Obviously having people vibing in the audience gives us a lot of energy, so we’ve had to create that energy ourselves by trying new takes on the songs we play. We certainly can’t wait to get back to normal, but in the meantime, it’s just another challenge that will help us hopefully grow as musicians,” Murphy said.

These may not be the ideal conditions for their first album cycle, but they’re still looking forward to 2021 as they write new material for whatever comes next.

“We might have a new version of an old favorite coming out early 2021, and we might feel really good about it. You’ll have to hear for yourself, so stay tuned.”

Learn more about Modern Ties in an in-depth interview on Episode 137 of the NEPA Scene Podcast.