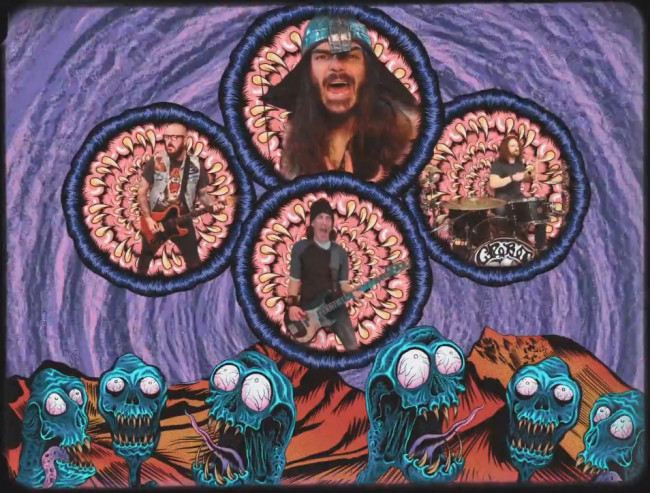 The gritty grooves, ballistic riffs, and bluesy psychedelic rock of Crobot are all back with the release of “Mountain,” the first single from an EP packed with guest stars that is due out this summer via Mascot Records.

“We’ve grown to know the Anthrax dudes pretty well through touring and developed a working relationship in addition to our friendships. We’ve always talked about writing with Frankie because we have a lot of the same influences, and that definitely shines through in ‘Mountain.’ Frankie has always lent us his ear and has been a big supporter of ours – it was a treat to work with him on something,” Yeagley said.

Directed and edited by Wombat Fire, the fun and trippy music video animates the distinct artwork by guitarist/backing vocalist Chris Bishop that is instantly recognizable from their previous albums and merchandise.

“Everyone Dies” was co-written by Zadinia, who performs piano, drums, and bass on the song.

“One of the last tours we did was supporting Steel Panther. We hit it off with all of the guys. Stix even got tattooed by Bishop! We kept in touch and he sent us a bunch of ideas he had for songs. We really gravitated towards this piano instrumental he had called ‘Jimmy’s Piano Song.’ We don’t know Jimmy, but Stix must really love that dude… ’cause that shit brought tears to our eyes. Through a couple of Zoom sessions, we were able to work everything out and that’s how we wrote ‘Everyone Dies.’ We really wanted to venture somewhere different with this one but still pump it full of our personality. This is our attempt to sit at the dinner table with Queen whilst eating a healthy portion of Meatloaf,” Yeagley described.

Songs like “Kiss It Goodbye” are B-sides that didn’t make it onto their latest full-length studio album, “Motherbrain,” while others are brand new.

“Howard was introduced to us through mutual friends. We have always been huge fans of his melodic footprint and his unique melodies. When we heard he would be interested in writing with us, we were beyond excited. He flew down to Austin and spent a few days in a studio with us. We had a such great chemistry with him and wrote ‘Kiss It Goodbye,” Yeagley recalled.

“We thought it was a shoe-in for being a track on ‘Motherbrain,’ but for whatever reason, it didn’t make the cut. It seemed like such a travesty to let such a great song sit on the shelf, so we’re pumped to let the world hear it!”

Like food of the gods, rock ‘n’ roll nourishes the soul. Striking a delicate balance between hard-charging riffs, ass-shaking funk, and out-of-this-world reflective stage attire during the raucous and raging gigs they remain known for, the Schuylkill County natives satisfied starvation for sonic sustenance on “Motherbrain,” their 2019 debut on Mascot Records.

“When we were making the record, it was all about ‘meat, strings, and emotion’,” Bishop affirmed. “It explains the thought process. We’d usually start the day with chicken biscuits from Chick-fil-A. Obviously, I would play the strings. The emotion comes from the sheer power of me playing.”

“It had nothing to do with the chicken biscuits,” Yeagley noted with a laugh.

During late 2017, the boys started to write what would become “Motherbrain.” Signing to Mascot, the group went from writing at Bishop’s spot in Austin, Texas to Marietta, Georgia, where they holed up in the studio with Corey Lowery (Seether, Sevendust, Saint Asonia, Stereomud) for a month. The producer’s direction to embrace the dark side took life while Yeagley delivered some of the most emotive recordings Crobot has delivered to date.

“I think it’s a much darker record, musically, lyrically, and thematically,” the frontman said. “It’s some of the heaviest material we’ve ever done, but it’s also some of the funkiest. We’re widening the Crobot spectrum even more. It’s the catchiest too. It’s less about wizards and dragons and more about everyday turmoil and the struggles of life. Corey made it digestible and appealing for not just dudes with beards or chicks with dicks.”

“It’s a song we never would’ve written by ourselves,” Bishop continued. “That makes it cool. It took us out of our comfort zone.”

“It’s an anthem about this outside perspective on the definition of a lowlife,” Yeagley explained. “There’s a misconception that being a touring musician without a lot of money makes you a lowlife, but how is that really any different from the rest of the world? And, if that does make you a lowlife, we’re OK with it!”

“I wanted a different spin on the act of stoning the devil,” Yeagley stated. “Muslims take a pilgrimage to Mecca in Saudi Arabia to throw stones at these pillars. The act is supposed to ward off evil spirits and cleanse one’s soul. It’s a different culture for the devil’s storyline in our genre.”

In the end, “meat, strings, and emotion” might just be what rock ‘n’ roll needs. Unfortunately, the band was only able to hit the road for a short album release tour and a few other shows before the pandemic shut everything down, though they were able to participate in some star-studded online collaborations over the past year.

“We want to maintain our identity from record to record. We always want to be genuine,” the singer left off. “It’s going to evolve, but it will always be Crobot.”