On Friday, DamnMillennial Promotions and Stage West announced the next installment in the drive-in “Pavement Rave” series of live DJs and electronic artists in the parking lot of Montage Mountain Waterpark in Scranton – a takeover by independent label Disciple Recordings.

Gates open at 4 p.m., and the 18+ concert runs from 6 p.m.-11 p.m. Tickets, which range from $169-$299 per carload (up to four passengers), are on sale now via Prekindle. Fifth passenger add-on tickets are also available. The event will be held rain or shine.

With countless Beatport No. 1s; millions of plays on SoundCloud and YouTube off the back of their lively social media interaction; collaborations with Datsik, Getter, Dodge & Fuski, and Astronaut; remixes for Destroid, Zomboy, Virtual Riot, Eptic, 501; and more under their belt, few can deny that Barely Alive is one of the most exciting and fastest growing bass music acts to emerge over the last few years.

The duo from Massachusetts initially made a name for themselves when they released their debut “Lost in the Internet” EP through Disciple Recordings in 2014 to global acclaim, hitting the No. 1 spot across four different genre charts on Beatport in just 24 hours, causing them to become an overnight success and labeled as the second highest-selling dubstep artist of 2014 on Beatport, one place behind Skrillex.

The touring soon followed across the United States and Europe, with Barely Alive taking part in the first Disciple Alliance U.S. Tour and the 2015 Datsik Ninja Nation Tour alongside Trolley Snatcha and Kennedy Jones.

The guys have also gained regular DJ support from the likes of Skrillex, Datsik, Excision, Zomboy, Skism, Downlink, Pegboard Nerds, and Far Too Loud, to name a few, and they’ve made regular appearances on huge online music platforms such as UKF, EDM.com, Your EDM, This Song Is Sick, and a guest mix for the infamous BBC Radio 1. In 2015, they unleashed their debut album, “We Are Barely Alive,” through Disciple and have since fully established themselves as a headlining act.

Modestep is a bass-infused band formed in London. Influenced by the strong presence of both rock and underground bass music in the capital, they closed the gap between the rock and electronic worlds that allowed them to stand out from every other act on the bill.

The band took the world by storm in 2011 with their track “Sunlight,” which was an instant chart and radio hit. After 10+ years of touring, their live act has taken them to almost every major city on the planet, including headlining to an extraordinary 750,000-strong crowd, and helped rack up millions of YouTube views.

Bandlez is two kids who met on the bus home from school when Diandre heard Vishal listening to “Ghosts’ n’ Stuff” by Deadmau5. Both have a passion for music and share vision to create stuff that simply sounds cool. With their recent releases earning support from some of your favorite artists, Bandlez are surely an act to keep an eye on.

Based in Los Angeles, Australian producer Rod Dawson, known within the bass community as “Volt,” has been making his name in the American bass scene since 2017 with no signs of slowing down. That year, he teamed up with Slushii to collab on a remix for “Like a Bitch” by Zomboy, which gained the attention from the likes of Skrillex, RL Grime, and The Chainsmokers and received positive buzz from the reputable Basshrush, EDM.com, and other well-known publications.

Since moving to the U.S. in 2017, Volt has done multiple tours across America, making stops in major cities such as Miami, Boston, Los Angeles, New York, and many others. He has also done tours in Japan as well as his home country of Australia.

Volt has released many singles since his debut original “Let’s Go” on his personal imprint. Since then, one of his crowd favorites has been his collaborative remix with Pierce for Boombox Cartel’s “New Wip,” which could can be heard during Yultron, Liquid Stranger, and many other major artists sets. His official remix for SAINt JHN’s track “Trap (feat. Lil Baby)” has topped the charts on Beatport’s Top Trap/Future Bass.

Jon Rualo, otherwise known as Ruvlo, is a New York City-based producer that has gained the support of artists such as Excision, Alison Wonderland, Zomboy, Black Tiger Sex Machine, and many more with his take on experimental bass music with hard-hitting drums and intense mind-melting bass. 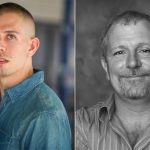