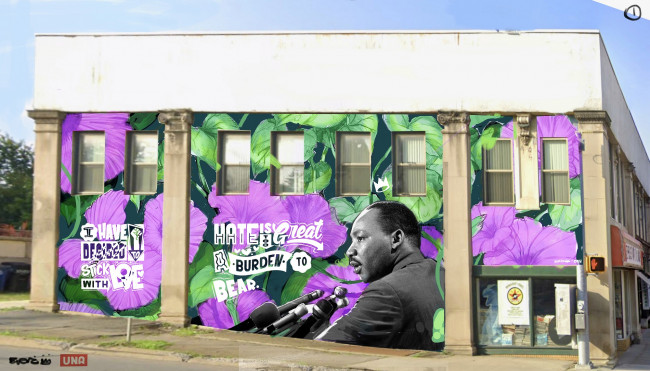 As part of Scranton Tomorrow’s new Mural Arts Program, illustrator Eric Bussart and letterer Emmanuel Wisdom A. are installing a mural titled “The Dream” on the façade of a building on Mulberry Street in downtown Scranton. The process began today and is expected to be completed by the end of the month, weather permitting.

Inspired by iconic civil rights leader Martin Luther King, Jr., the mural features MLK’s likeness with morning glory flowers and lettering conveying his famous quote: “I have decided to stick with love … Hate is too great a burden a bear.” Bussart designed the 20-foot-by-60-foot piece (approximately 1,200 square feet) as a tribute to his hero, whose efforts changed the world during the civil rights movement of the 1950s and 60s. He chose morning glories because they are resilient, just as MLK was.

Bussart is an illustrator based in Scranton who specializes in interior and exterior mural art, album art, illustrated type, portrait illustration, poster art, comic art, graphic novel art, and more. He earned a bachelor of fine arts in illustration from Marywood University in Scranton, and he currently serves clients in the greater Scranton area, New York, and Philadelphia.

Bussart has painted several murals in the city of Scranton, including one nearby with Wisdom on The Leonard Theater building on Adams Avenue, one of John Lennon a few blocks over on Lackawanna Avenue, one inside The Marketplace at Steamtown, one along the Lackawanna River Heritage Trail, and one of an Invaders football player on Catalano’s in West Scranton, among others. His latest project at 607 Mulberry Street is located on the left side of independent record store Embassy Vinyl (352 Adams Ave., Scranton).

Wisdom is the founder and creative director of UNA Design Company in Philadelphia. He specializes in hand lettering, typography, branding, graphic design, packaging, apparel design, and mural and art direction. He holds a bachelor of fine arts degree in graphic design from Marywood.

Scranton Tomorrow launched its Mural Arts Program this year. Designed to transform the downtown landscape and connect communities, the murals will reflect the city’s history and qualities that make Scranton unique.

Featuring QR codes at each site, visitors are encouraged to use their smartphones to embark on brief self-guided tours to learn more about the history and theme of each piece. Through partnerships with professional artists specializing in mural art and conservation, a set of guidelines for future public art projects is in development as part of the program.

This project was made possible with support from Lackawanna County Arts & Culture Department and the Scartelli family.