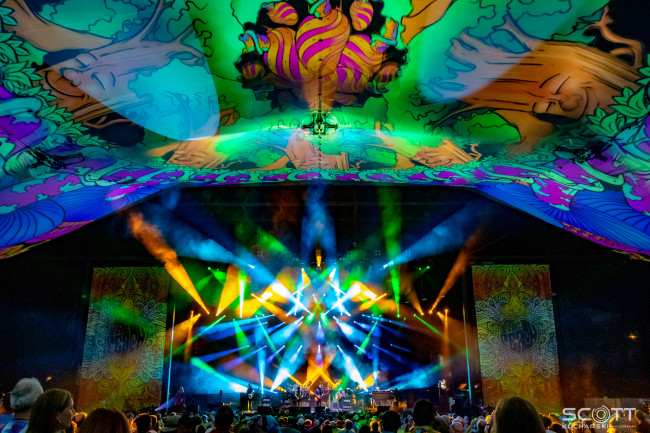 Local music fans and those who travel from across the country have been eagerly awaiting news on whether or not the Peach Music Festival would happen this year. Today, they received their answer in the form of a teaser image posted on social media.

Simply saying “Coming soon to a mountain near you,” along with “July 4th Weekend 2021, Montage Mountain – Scranton, PA #SeeYouAtThePeach,” it appears that Live Nation is moving forward with the ninth annual festival on Thursday, July 1 through Sunday, July 4 at The Pavilion at Montage Mountain and Montage Mountain Waterpark after canceling last year due to COVID-19.

The 2020 headliners – including the long-awaited reunion of Oysterhead (Trey Anastasio of Phish, Les Claypool of Primus, and Stewart Copeland of The Police), two sets of Joe Russo’s Almost Dead, and two sets of The String Cheese Incident – were signed on to return in 2021, but with the pandemic still a factor, the rest of the lineup could still change in the coming weeks. No other information has been made available yet, but with the event coming up in less than two months, expect more to come out soon.

Nearly one year ago on May 11, 2020, the Peach Fest posted the following letter about rescheduling:

Thank you for supporting the Peach Music Festival. We love our Peach family and hope you and your loved ones are safe. Out of an abundance of caution, we have decided to reschedule Peach 2020 and reunite on July 1-4, 2021. While we are disappointed to share this news, the health and safety of the entire Peach community is our top priority.

All Peach headlining acts will return in 2021 – Oysterhead, String Cheese Incident, and Joe Russo’s Almost Dead. Fans can expect a very similar lineup to this year with some tasty additions, special sets, and surprises mixed in.

Your 2020 Peach order will be valid for Peach 2021. Peach 2020 passholders who hold onto their festival passes for next year will be exclusively invited to an additional night of music on Wednesday, June 30, 2021.

Fans who hold onto their festival passes with camping, RV passes or glamping passes will receive special early access to the campgrounds on Wednesday, June 30, 2021.

Fans who would like a full refund have until Wednesday, June 10, 2020 to make that request. Current passholders will receive an email from Front Gate Tickets within 72 hours including details for both options.

We appreciate everyone’s patience and kindness as we worked through this process. Thank You Peach Family! Soon we will be back together sharing blue skies and sunny days. In the meantime, please take care of yourself and each other. We will see you at the Peach!

That same day, Montage Mountain’s other major music festival, Camp Bisco, was also rescheduled to July 8-10, 2021, so there will likely be an upcoming announcement regarding that as well. Bisco was scheduled to feature the usual six sets by festival founders The Disco Biscuits, along with headliners Bassnectar, GRiZ, Tipper, Lotus, San Holo, STS9, Subtronics, Shpongle (Simon Posford live) backed by The Disco Biscuits, G Jones, and TroyBoi.

Typically held in mid-August, the Peach moving to Fourth of July weekend was a major change for the event, and the rare appearance of Oysterhead was a big surprise. Joe Russo’s Almost Dead planned to welcome Oteil Burbridge of The Allman Brothers Band on bass in place of Dave Dreiwitz, but it’s unclear if that will happen this year.

Turkuaz was set to celebrate the 40th anniversary of the Talking Heads album “Remain in Light” by performing it in its entirety with special guests Jerry Harrison of the Talking Heads and Adrian Belew. In addition, The Slip planned to reunite for a special set, and Billy Strings was going to serve as an artist-in-residence.

Oteil Burbridge and Friends were scheduled to perform with Devon Allman and Duane Betts “in a nod to the Peach Music Festival’s origins” as an Allman Brothers event, and the Guitar Pull introduced last year was set to return after it went over so well. Over 50 artists were announced, though many of them are regulars at the festival and will likely be back in 2021.

Described as “the first-ever Allman Brothers Band-inspired festival in the Northeast,” the Peach “has quickly evolved into one of the most highly-anticipated summer musical events, loved by music enthusiasts from across the nation,” according to organizers.