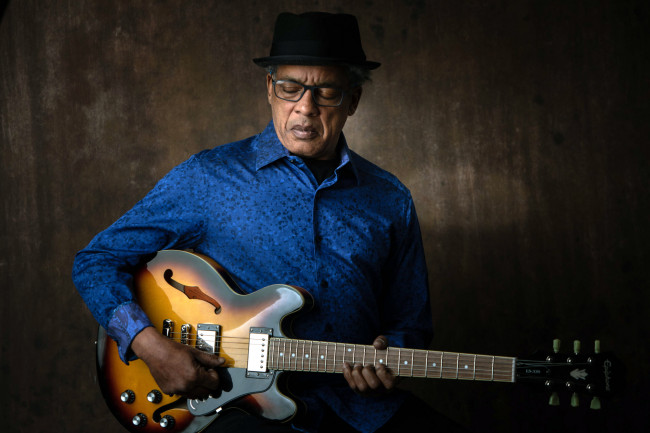 It is perfectly poignant that veteran bluesman Clarence Spady chose to include his version of Z.Z. Hill’s hit song “Down Home Blues” on his new album “Surrender,” as the Scranton-based singer, songwriter, and guitarist has followed the footsteps of this soul/blues pioneer who created a combination of blues and contemporary soul styling that helped to restore the blues to modern black consciousness.

Released today on all major platforms via Nola Blue Records in Lancaster, this is the first album from Spady since 2008, and it is a profession of faith and declaration of determined recovery from an artist whose life has been full of dramatic ups, downs, and sidetracks since breaking into the scene in the mid-’90s and receiving his first W.C. Handy Award nomination in 1997 for his debut album, “Nature of the Beast” (Evidence Records, 1996). His sophomore release, “Just Between Us” (Severn Records, 2008), garnered a Blues Music Award nomination for Soul Blues Album of the Year.

The 59-year-old’s new collection of nine very personal tracks includes seven original songs and three previously unreleased recordings from 1999 captured at the River St. Jazz Cafe in Plains. These songs, written and recorded over a 20-year period, include collaborations with William “Wes” Weller and new mentor Andy Pace, as well as his protégé Adam Schultz.

The album also features material and performances from lost friends Lucky Peterson and drummer Shorty Parham, and a special song he wrote for his son, whose life was cut short at only 25, creating a highly emotional landscape.

Two shimmering notes from Spady’s Stratocaster bring us into the Memphis soul opener “If My Life Was a Book,” setting the tone of introspection and reminiscence on a musical life; a music video illustrating this was just released as well. He then hands over the guitar duties to up-and-coming phenom Adam Schultz, who wrote and plays lead on “Good Conversation,” a super smooth track with soulful vocals and jazzy flavors of tasty horns from Tom Hamilton, keyboards from Scott Brown, and Bob O’Connell on organ. Spady demonstrates the breadth of his theatrical abilities on the slow burning “When My Blood Runs Cold.” The showstopping number penned by Lucky Peterson is the perfect vehicle for his masterful vocal and guitar skills.

It has often been said that singing the blues will make you feel better, relieving your pain into something lighter when the music, through lyrics and melodies, allow one to make sense of tragic realities. Spady shows us this in the straight-ahead blues shuffle “K-Man,” a song he wrote for his son Khalique, as a cathartic memorial of a child taken too soon who he thinks of every day.

He wears his heart on his sleeve during the emotional title track, “Surrender,” laying his soul to bare in a penitent testimony of gospel blues. The aforementioned Z.Z. Hill standard is given an acoustic treatment for the album, marking a fresh approach to the oft recorded and much loved “Down Home Blues.”

The first of three live tracks from 1999, “Addiction Game,” find Spady in his element, digging deep into his guitar and vocals while the band provides deep funk groove full of fiery chops.

Mark Hamza propels the quartet along on Hammond organ and pedal bass, while Spady trades blazing solos with saxophonist Tom Hamilton on the courageous instrumental “Jones Falls Expressway.” Shorty Parham sings with Spady on the finale “Pick Me Up,” an easygoing plea to a lover from a contrite and humbled man.

“Taken as a whole, ‘Surrender’ could be construed as a summarization of Spady’s life,” noted music historian Bill Dahl.

“The riveting contemporary blues guitarist never fails to satisfy when he gets inside a studio.”

Remarkably, “Surrender” is only Spady’s third release in a quarter century. A 12-page collectible booklet of musical history, photos, and song information is included with each CD. Hopefully the strong album will garner him overdue attention and support so fans won’t have to wait that long for the next one.

“The support and recognition from radio, media, and fans in response to the first two singles has been outstanding, and we look forward to sharing the complete collection.”