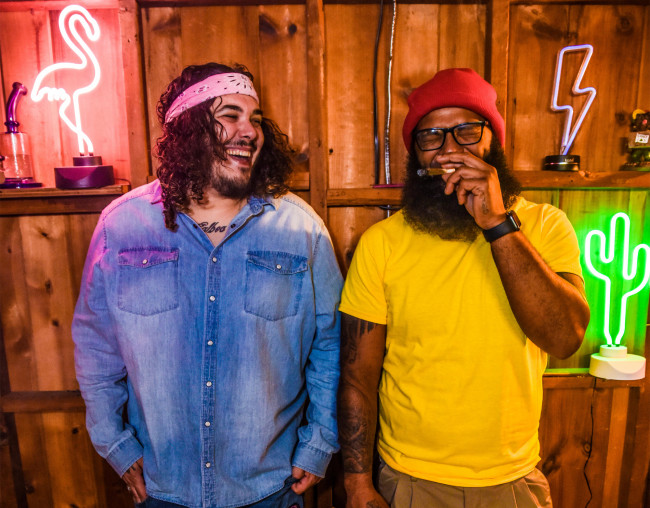 Hip-hop fans can wake and bake with Space Kamp this week. Beyond / Hello is introducing a new medical marijuana/cannabis dispensary to Hazleton, and the grand opening on Monday, June 7 will feature a live morning performance by the Allentown-based reggae rappers.

The weed-smoking duo have made their support of legalization clear with songs like “Stoner Chick” and “Home Grown,” as well as a recent appearance at the Pennsylvania Cannabis Festival in April, so they are a perfect fit for the event, which begins with a ribbon cutting ceremony at 10 a.m. They are also set to rap at another Beyond / Hello opening in Easton on Friday, June 11 at 10 a.m.

With these additions, Beyond / Hello will have 13 active Pennsylvania locations, including two in Scranton on Moosic Street and South Main Avenue.

Beyond / Hello Hazelton will focus on bringing personalized service and individualized experiences to customers “beyond the first visit and first ‘hello.'” The dispensary, which is open Mondays through Saturdays from 9 a.m.-8 p.m. and on Sundays from 10 a.m.-6 p.m., carries flower, concentrates, cartridges, tinctures, topicals, capsules, pills, and various ancillary products such as batteries, vapes, and merchandise. This wide range of cannabis products come from nearly all Pennsylvania MMJ grower/processors.

Serving both patients and caregivers alike, the store’s trained staff members are on-site to dispense products, answer questions, guide patients to find the medication that best suits their condition, and provide service that shows their “commitment to exceeding customer expectations,” according to the company’s website. A pharmacist will be available during all operating hours for complimentary consults; both walk-ins and appointments are welcome.

Beyond / Hello (1000 W. 15th St., Hazelton) is handicap accessible, LGBTQIA+ friendly, and offers a 10 percent discount to anyone 65 years or older, veterans, and active military servicemen and women with identification.

Customers can also call ahead or shop online via beyond-hello.com, a new digital shopping experience that shows real-time pricing and product availability and allows users to reserve products for curbside or in-store express pick-up.

Dreaming of warmer days, Space Kamp wrote their latest single, “Waiting for Summer,” in the dead of winter. Featuring their positive and upbeat outlook both lyrically and sonically, Oskee and Adoo said, “We wanted to release a song that gives everybody that summer feel a little early!

“We all tend to just feel better and stay on a higher vibration in the summer; being in the Northeast winter can get pretty grim. In some ways, we are all waiting for summer. We try to stay on that vibe all year round.”

For the new song released on April 2, the psychedelic, genre-bending pair worked virtually with Juno Award-winning producer Rob the Viking (Swollen Members, XL the Band). Due to COVID-19 travel restrictions, Space Kamp was unable to travel to Canada to lay down the song with their friend and longtime producer. Vocals were recorded at Marsten House in Philadelphia with engineer Ethan Mintz and sent to Rob the Viking, who arranged and composed the song using live instrumentation at The Chamber Studio.

“Rob is really dialed in to our sound and where to take us sonically,” Space Kamp noted. “The studio musicians he is bringing in are amazing and are really helping us create something honest and timeless.”

Known for looking at the brighter side and reflecting back at 2020, they added, “Outside of personal struggles we all have had over the last year, the downtime has actually really helped us as a group. Not being able to tour has been rough, but we have been able to really dial-in and get more creative. We have also grown tighter as friends.”

Part of that creativity came out on Jan. 15 when they teamed up with Scranton marketing team Ionic Development for a live streamed concert at the Emmaus Theatre in Emmaus, Pennsylvania that was part of Ionic’s Juicebox Sessions series with local artists. It streamed for free on the NEPA Scene and Juicebox Sessions Facebook pages as well as Ionic’s YouTube channel and Juicebox Sessions on Twitch, where fans chatted with the musicians live in between songs.

Space Kamp first came together in 2017 with the goal to create whatever felt right without limitations. Their music exploded onto the scene with their first single, “Stoner Chick,” which garnered critical accolades from High Times Magazine; endorsements from Illadelph Glass, Beard Bros Pharms, Weedmaps, and SRH Productions; and currently resides on 150 Spotify playlists (and counting.) Soon after, they hit the road with the release of “Terpene Station,” their 2017 collaboration album with lyricist Spit Divo and producer Rob the Viking. Magic was made once again with Rob the Viking on the critically acclaimed fan-favorite album “Electric Lemonade.” Released on June 26, 2020, it reached No. 7 on the Google Music Reggae Albums chart, No. 15 on iTunes Reggae Albums chart, and No. 80 on Neilson’s Rap chart and received accolades from UndergroundHipHopBlog, Top Shelf Music Magazine, Reggaeville, and Tattoo Magazine.

Before the pandemic, touring had been a way of life for Space Kamp, who embarked on three U.S. tours and two tours in Canada, all the while gaining a dedicated following of “Rebel Hippies” along the way. Now they’re working on their upcoming album “Butterfly Effect,” which will include “Waiting for Summer.” Taking their time to pull the record together, the duo will be releasing new material regularly, with tour dates starting to come together, such as a free concert at the Levitt Pavilion SteelStacks (789 E. 1st St., Bethlehem) on Sunday, July 11 at 6 p.m.