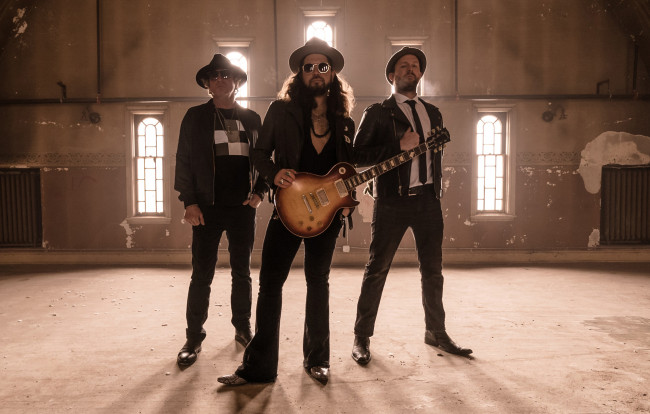 On June 25, the F.M. Kirby Center in Wilkes-Barre reopened to the public with a series of classic movie screenings that runs through July 30 after being closed for more than a year due to the pandemic.

Today, it was announced that the “Come Back to the Kirby” series will continue with two live concerts by two different Wilkes-Barre-based bands.

Blues rock powerhouse trio Dustin Douglas & The Electric Gentlemen will perform on Saturday, July 17 at 7:30 p.m., and Indigo Moon Brass Band will bring a celebration of New Orleans-inspired music to the Kirby Center on Saturday, Aug. 21 at 7:30 p.m. with special guest Justin Mazer, a touring guitarist and Shavertown native.

Both acts have previously performed as part of the venue’s Chandelier Lobby Series. This summer, both will take the main stage for this special “Come Back” series.

Tickets for these performances, which are $20 in advance or $25 the day of the show, go on sale this Wednesday, July 7 at 10 a.m. and can be purchased online at kirbycenter.org and ticketmaster.com, as well as by phone at 570-826-1100. The Sundance Vacations Box Office at the F.M. Kirby Center (71 Public Square, Wilkes-Barre) will open for in-person sales on Tuesday, July 13 at 10 a.m.

Led by transcendent lead guitarist, singer, and songwriter Dustin Douglas (Lemongelli, The Badlees), The Electric Gentlemen – Tommy Smallcomb on drums and Matt “The Dane” Gabriel on bass – leave even the most discerning music fans with little left to ask for at the end of any live performance.

On April 30, the trio released a new single called “Broken.” Recorded at 8 Days a Week Studios in Northumberland by revered engineer/producer and former Badlees/Cellarbirds bassist Paul Smith, the tune proves once and for all that the blues rock genre is most definitely alive and well.

A music video for “Broken,” directed by award-winning director Jonathan Edwards of 570 Drone, was shot in the band’s hometown in the historical Irem Temple building. Currently a restoration project, the deteriorating theater was Wilkes-Barre’s primary performing arts venue in the early 1900s and known for its Moorish Revival architecture, towering minarets, and stained-glass dome.

“The fact this beautiful ‘Broken’ theater exists right in our backyard is amazing,” Douglas said. “There was no doubt this was the perfect location for this new video.”

“‘Broken’ is a very good sonic explanation of who we are as a band,” Douglas noted. “Classic rock with a modern twist. We do our best to carry the torch of our power trio forefathers. The spirit of The Jimi Hendrix Experience, Stevie Ray Vaughan and Double Trouble, Cream, and Mountain runs deep in my veins.”

This is the group’s first new music since their 2018 full-length album “Break It Down,” which found itself on the Roots Music Report’s Top 20 Blues Rock Album charts and the Top 10 Pennsylvania Album charts since its release. It also hit the Blues Album, Blues Singles, and Blues Rock Single charts.

Douglas released his first solo album, “Black Skies and Starlight,” in 2014 before going back to his power trio roots with the self-titled debut record “Dustin Douglas & The Electric Gentlemen” in 2016. They followed up with an EP, “Blues 1,” in 2017, before their sophomore album, “Break It Down,” came out the following year.

The band is very unique to the Northeast region. Inspired by the music of NOLA, its three founding members spent a few years in the culturally rich “Big Easy.” These musicians may have moved back north, but you can still find them performing in authentic New Orleans fashion with the addition of more local members.

The group, who often takes their music to the streets for roaming outdoor performances, can play a wide range of music, from R&B and hip-hop to traditional New Orleans favorites to funk and free jazz improvisation. This is the kind of music that gets audiences to jump up and dance no matter where they are.

Over the years, the Indigo Moon Brass Band has performed with the famous Dirty Dozen Brass Band and opened for Maynard Ferguson.

At the Kirby Center, they will be joined by journeyman guitarist Justin Mazer, who independently released two surprise debut albums entitled “Controlled Burn” and “Discourse” on April 9.

Hailing from Luzerne County, Mazer has been primarily known as a sideman over the last five years for artists such as Ryan Montbleau, Cabinet, Sister Sparrow & the Dirty Birds, Leroy Justice, Electron, Tom Hamilton’s American Babies, and others. This is the first time he has released music under his own name as he begins to focus more energy on developing his version of reflective and spacious instrumental rock.

Over the years, Mazer has enjoyed many onstage collaborations with artists like Bob Weir, Jim Lauderdale, Larry Campbell, Steve Earle, Oteil Burbridge, Erik Deutsch, Fruition, and Steve Kimock, among others. His notable festival appearances include the Peach Music Festival in Scranton, Lockn’, Firefly, Electric Forest, Jam Cruise, and Cayamo, and his playing has been noted by the likes of Rolling Stone, Relix, and Guitar Player Magazine. He has also had music featured in television shows such as “Z Nation” on SYFY.

See NEPA Scene’s photos of Dustin Douglas & The Electric Gentlemen performing with Ed Randazzo at the Mauch Chunk Opera House in 2018 here and listen to all three members of the band talk about blues music, the local music scene, and more in Episode 35 of the NEPA Scene Podcast: