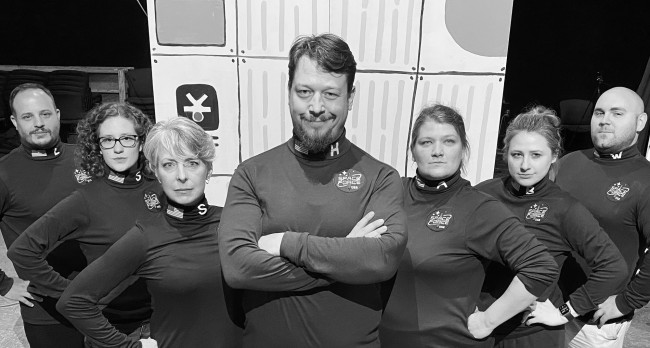 What would you do if you were a million miles from Earth and your rocket ship was hit by a meteor and suddenly split open, leaving you floating in space with only your communicator to link you to your six crew members?

Written in 1975, the astronauts in Bradbury’s sci-fi one-act play contemplate their fate and philosophize about life and its purpose, allowing the actors to dig into their beings and face questions of profound magnitude.

Originally intended to be presented through Zoom earlier this year, the pandemic’s evolution provided a creative opportunity to rethink a theatrical presentation that would have otherwise been static, a major flaw of virtual theatre. Gaslight’s production has been re-envisioned in a hybrid, immersive, outdoor format taking place under the stars themselves.

“The play is vintage Bradbury – meditations on the biggest questions of life through the worlds of people we all can recognize and even see in ourselves,” director Mike Little said.

“As the crew collectively confront individual mortality, Bradbury shows us that all we have is each other.”

Performances will be held at 9 p.m. on Thursday, Friday, Saturday, and Sunday at King’s College (133 N. River St, Wilkes-Barre). Audiences should bring camp chairs and/or blankets and park in the Holy Cross lot (accessed from North Franklin Street). This production will be held on the lawn in front of the Auxiliary Gym (between the former chapel and the Scandlon Gym). The site is located across from the Corgan Library’s entrance (14 W. Jackson St., Wilkes-Barre).

General admission tickets are $10 and will only be sold “at the door” beginning at 8:30 p.m. Cash and cards are accepted.

Following King’s College guidelines, guests will be asked to social distance and wear masks on arrival. Anyone unvaccinated will need to remain masked for the entire performance.

The Gaslight Theatre Company began in August of 2003 when a group of ambitious Wilkes-Barre actors got together to produce William Shakespeare’s “A Midsummer Night’s Dream.” The play was made on a shoestring budget, but after a successful run, this group of actors-turned-producers decided to continue producing plays and Gaslight was born.

Their original mission was to bring high-quality productions of classical and underproduced plays to audiences in Northeastern Pennsylvania. Moliere’s “Tartuffe” was their second endeavor and, thankfully, the positive reception it received helped the fledgling company build momentum. During the 2004-2005 season, they revisited the work of Shakespeare on two occasions, producing two of his greatest tragedies, “Macbeth” and “Romeo and Juliet.” Gaslight also added works by Samuel Beckett, Pierre de Marivaux, and Sophocles to the growing lineup of theatre classics.

In the three years that followed, they produced eight more plays, including the addition of a series of plays for children. Gaslight continued to produce works by Shakespeare and added a number of contemporary works to the expanding portfolio.

In 2009, Gaslight took a brief hiatus; although the company was idle, its members were busy enhancing their individual skills in preparation of a triumphant return. Some members completed advanced degrees, some acted, some traveled, and some started families.

In 2010, Gaslight was back on the stage with a production of “Dancing at Lughnasa” and, since then, has produced dozens of musicals and plays, including “Quiet Cowboy” written by Gaslight member Matthew S. Hinton (marking their first production of an original play) and the reoccurring “Playroom” series, another original concept consisting of one-act plays centered around different rooms in a house.

Since its debut in 2012, this short-form format featured 16 of the region’s most talented playwrights, 98 cast members and directors, and 69 one-acts that concluded with an eighth installment in 2019.

While the coronavirus pandemic shut down most live events in 2020, Gaslight took this downtime to record a roundtable discussion about equity in the NEPA theatre community for their YouTube channel over the summer and, in September, they participated in the Scranton Fringe Festival’s “Under Glass” series, a socially distanced cavalcade of new and original works performed safely behind the glass of storefronts in downtown Scranton, including Gaslight’s own improv show “Leave the Cannoli.”

The Gaslight​ ​Theatre​ ​Company​ ​was​ ​founded​ ​with​ ​the​ ​mission​ ​to​ ​create​ ​impactful, innovative,​ ​and​ ​high-quality​ ​theatre​ ​that​ ​enriches​ ​the​ ​lives​ ​of​ ​local ​artists​ ​and​ the ​community, and this mission continues today as they learn, grow, and cultivate the arts in NEPA.