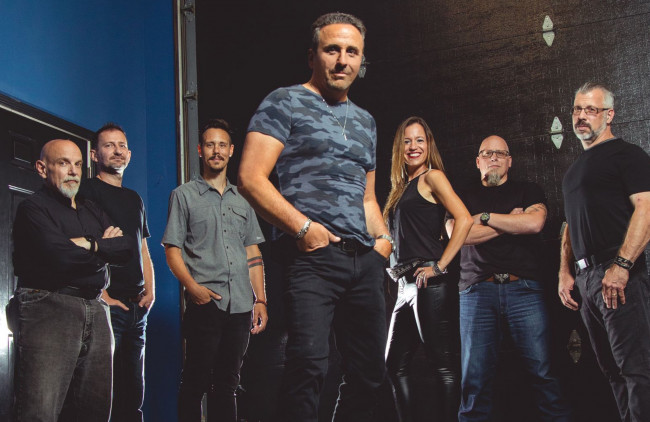 Lake Ariel singer/songwriter Adolfo Busillo, a former Atlantic Records recording artist and frontman of the band Abuss, has unveiled a new project that he describes as “traditional rock and country music infused with modern pop elements.”

The single is the first from a new collection of songs that the group is currently working on and the one that they say epitomizes NMR’s formidable sound.

“This song captures what we, as a band, are really about,” Busillo said. “It’s strong lyrically, with a dynamic story woven throughout, and the juxtaposition of the traditional country/rock vibe with the infectious groove of the beatbox just makes you smile. We just want to delight our fans with catchy melodies, infectious guitar riffs, and inspiring lyrics that take them on a cosmic journey with us.”

To celebrate its debut, New Moon Rising also has accompanying music video produced by Busillo that he said was inspired by “reminiscing about his childhood and the sentimental feeling of being young and free without consequence.” With videography and editing by Christopher Rhatigan, the video conveys a nostalgic and heartwarming message of living with “No Regrets,” a message that the band believes needs to be heard, especially today.

“With everything that the entire world has had to endure in the last year, the message of looking forward to a brighter future while remembering the ‘good old days’ of the past is now more important than ever,” Busillo explained.

“It puts everything in to perspective of where you’ve been and how you got to where you are today. During times like these, we really can’t afford to waste your life holding on to regrets.”

Prior to forming NMR, the chief songwriter and lead vocalist was signed to Atlantic Records with his band BRS. Busillo, who was born and raised in New York before calling Lake Ariel home, went on to form the critically acclaimed and commercially successful band Abuss, with whom he wrote and performed the hit “Poor Days” (Daybreak Records) in 2015. The song peaked in the Top 15 on the AC40 format and went on to enjoy record-breaking chart activity on various charts, ranging from New Music Weekly to the Independent Music Network.

Continually seeking spirituality in his quest for the perfect band to create a new sound, he didn’t feel complete until he created this newest project. He decided to call the band New Moon Rising for the beginning of a moon’s cycle, which is a representation of his cosmic journey with his new band.

Bethany Kazimir is from Northern New Jersey and has been a singer/songwriter for over 25 years. Discovering playing and singing at an open mic night, she brings angelic harmonies and backing vocals to the band. Her style of singing covers genres from Southern rock and pop to classical and theatre and has been in a cover band since February of 2019.

A doctor of musical arts, Peter Philip DeSalvo is a classically trained percussionist. His performance credits as a drummer and percussionist range from jazz to country, rock to classical, as well as numerous regional musical theatre shows. He has opened for major recording artists such as Alabama, Charlie Daniels, Marshall Tucker, Dwight Yoakam, Mickey Gilley, Vince Gill, Ronnie Milsap, James Brown, and many more, playing in major venues with audiences as large as 45,000.

Jasper Paci is a multi-instrumentalist who attended the Atlanta Institute of Music and is a 20-year veteran of the Scranton music scene. He has played extensively with both local and touring bands up and down the East Coast as well as uniquely dynamic solo performances. He is equally at home on the banjo, guitar, bass, harmonica, vocals, and vocal percussion.

Bill Miller was born in Hungary and has played guitar for more than 30 years, performing in over 1,500 shows in bands of varying styles in nine countries. He has played in the U.S. with country singer Nikki Briar for six years and in over 1,000 shows on the East Coast as the opening act for LoCash, Marshall Tucker, Chase Rice, and Chris Janson, just to name a few.

Stephen Kazimir was inspired by Geddy Lee, John Myung and Jaco Pastorius to pick up the bass at the age of 19. He grew up on the sounds of big band and swing, Frank Sinatra and Bing Crosby. He has played in bands of many styles, including pop, rock, church, prog rock, and metal. Inspired by friends living life, he is always a student, including 30 years of martial arts that earned him two black belts.

Scott Zimmerman is a multi instrumentalist and vocalist who has extensive experience performing in genres ranging from jazz to classical to rock and metal. He is frequently seen in theater pits in Northeastern Pennsylvania and the southern tier of New York and has been a church organist for 24 years. An honors graduate of the music school at Penn State, he has taught high school chorus for 26 years and serves as choral coordinator for District 9 of the Pennsylvania Music Educators Association.