This time of year, everyone is surrounded by images of ghosts, witches, monsters, and masked killers, but what is truly unsettling is grief, depression, and the other dark emotions people actually have to face every day.

For over a year now, the Scranton-based alternative rock band has been writing and recording a new album, and as they finally start to reach the end of a journey that was prolonged by the pandemic and all the chaos it brought, “Ending” will serve as the public’s first listen into another deeply personal project for the group.

“The song was produced, engineered, and mastered by Paul Smith from Eight Days a Week Studios in Northumberland. This was the third song we recorded for the record – we lucked out and got Sylvia Massy (Tool, Tom Petty, Johnny Cash, Red Hot Chili Peppers) to mix the song for us too,” vocalist/guitarist Ed Cuozzo told NEPA Scene.

“It’s just a really strange song and a different direction for the band – I think it really announces itself with the drum intro right from the start and thought that others might enjoy its weirdness.”

While he was writing about his own experiences, he was inspired by the Netflix film “I’m Thinking of Ending Things” that was written and directed by Charlie Kaufman (“Being John Malkovich,” “Adaptation,” “Eternal Sunshine of the Spotless Mind”).

“It’s my interpretation of the movie. Honestly, I’m not a movie buff. I love movies, but I’m not very knowledgeable about film. However, one night [my wife] Chelsea and I decided to throw this movie on, and it was just so bizarre. It was so hard to follow the story to because of the strange jumps in time in the film, but the whole time you get this feeling that all isn’t as it seems. If I’m being honest, I saw a lot of mirrors of my own life/pain I was dealing with in that movie, especially the scenes with the parents. I don’t want to go too in depth because it would just come off overly sad, but I saw myself in a lot of ways.”

This cinematic approach bleeds into the music video that was filmed and edited by Eric Curtis and Mark Naples, the newest member of the now five-piece band, with stars Ryan McKean and Kailin Bouse.

“Driving the killer old car in the vehicle is David Gilio, who was nice enough to bring his car out and drive around in the rain so we could get a ton of cool shots. The video is a metaphor for feeling pursued by grief, only being able to understand it and lessen its blow by confronting it,” Cuozzo explained.

“I was trying to think of how to visually represent grief – and fear of the unknown is a big part of it for me. I like the idea of having a car representing the heaviness of grief chasing you down, feeling like right when you get away from it, it creeps right back into your life. But sometimes you have to turn and face it head on for you to reclaim your life – hence the car disappearing at the end of the video when Kailin and Ryan finally confront it together. They finally look directly at the car when they think they are about to die, only for the car to disappear.”

This was University Drive’s music video debut and, despite the heavy subject matter and weather conditions, Cuozzo said that they had a great time making it.

The real struggle was in “endlessly recording” to get this upcoming album made with Ryan Grutt (bass), Steve Martin (drums), Angelo Maruzelli (guitar), and Naples (guitar).

“Well, we got sidetracked a few times. We were going to start sooner, but then the pandemic hit and none of us knew what to really do with everything in flux. So after some time had passed and vaccinations became more readily available, we started to work together. I started with 50 songs demoed out on my own, which we whittled down to 20 we liked – then we recorded 17 or 18 of them and selected 12 for the record. It was beautiful insanity,” Cuozzo recalled.

“Right at the beginning of making this album, we parted ways with [bassist] John Husosky and [guitarist] Scott Jordan – both their importance to the foundation of what we do cannot be overstated. We decided to just record a big intense rock record – lots of overdubs, just make it huge. While we were recording, we ended up having our buddy Eric Curtis come down to film some in-studio footage, he brought Mark to help him with some stuff, and we all got along – Ryan and Mark have been friends for years – and when we needed someone to fill out the third guitar parts live, there was a mutual interest on both ends to play together. It’s been really, really awesome so far. Mark is a fantastic guitarist – a beast.”

Producer Paul Smith lived up to the name of his studio, Eight Days a Week, and put in the work to make this collection of songs the best it could be while growing close to the group.

“Steve is an old friend of Paul’s, and he kept mentioning that we should go check it out. We set up a meeting between Steve, Paul, and myself and we seemed to all hit it off pretty immediately. We shared a lot of the same influences and bands that we loved, so it seemed like a match made in heaven. It was incredible. It started off as a working relationship and quickly turned into a deep friendship between all of us and Paul. He’s a master of his craft, no doubt,” Cuozzo said.

“We finally finished tracking a few months back and now we’re just mixing the record. We were lucky enough to get Sylvia Massy to mix this first single for us, which is so, so, so unreal to even think. She worked with so many incredible artists – Tool, System of a Down, Tom Petty, Prince, the list goes on… it’s nuts! She was kind enough to work on one of our silly songs. She did an unreal job; she’s just a force of nature.” 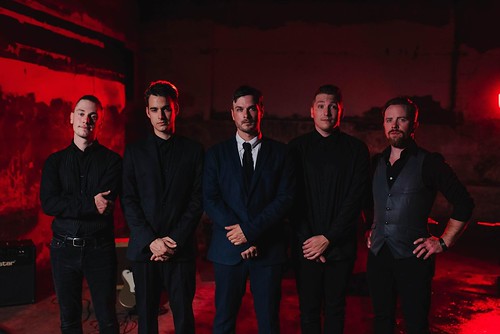 Even with famous help, the band had the unenviable task of following up “Clear,” a concept record that directly involved their fans and received so much local acclaim that it won Album of the Year in the 2019 Steamtown Music Awards while the band was named Rock/Alternative Act of the Year in the 2020 SMAs. This one is shaping up to be just as profound, though with a different approach.

“The focus last time was more like an art piece, or like a film without the images. This time the focus was songs, just having good songs. But, over the course of a couple months, themes started to just sort of untangle and reveal themselves. The big arc of this record is really, ‘How do you move forward though grief? How do you get to the other side of depression and heal?’ It’s never really answered, just sort of expanded upon. This album will be a direct response to the narrative set in ‘Clear,’ but it’s definitely different,” he shared.

Things are really just beginning for University Drive, especially after they received national attention before the pandemic by touring the country for a few months with gold-selling alternative rock band Cold.

“It was an incredible time. I think it really cemented in us that this was something we wanted to continue to seriously pursue. It was amazing and incredibly humbling to play in venues we only ever dreamed of playing. We made a ton of new friends on the road, and it seemed like a lot of their fans took kindly to our music.”

They have only played a handful of shows this year, so while Cuozzo couldn’t reveal the title of the record just yet, he did note that they have at least one more show to announce soon as they put the finishing touches on another emotional excursion.

“I was just writing about my life and grief. After my mom passed away, it felt like this whole life I lived ended. It did end. I know everyone will go through this, but it’s incredibly difficult to cope mentally and emotionally with watching your entire life sort of disappear. So the themes are about mainly trying to refind yourself, trying to figure out how to live and find motivation to recognize that, even though certain portions of your life may be ending, your life isn’t necessarily over.” 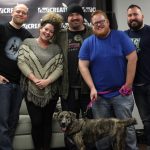