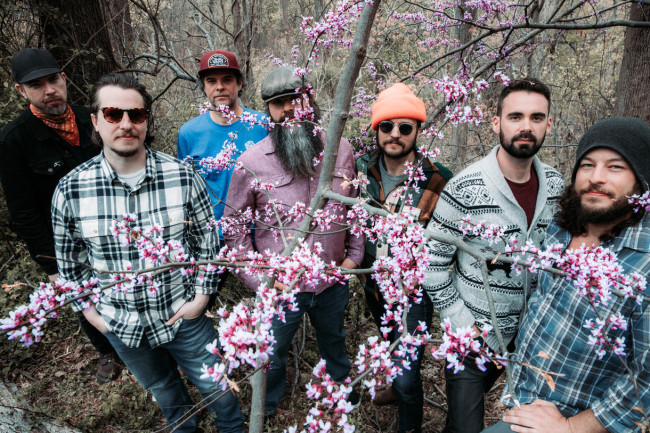 Scranton/Wilkes-Barre jamgrass group Cabinet will return to the Sherman Theater in Stroudsburg for a two-night run of psychedelic roots rock and bluegrass folk music on Friday, April 1 and Saturday, April 2.

The Dirty Grass Players, a four-piece new-grass band from Baltimore, will open on Friday while the Wilkes-Barre-based Brendan Brisk Band will bring their “psychedelic funky jazz pop” to the stage on Saturday. On both nights, doors open at 7 p.m., and the all-ages concerts start at 8 p.m.

Tickets, which are $27.50 in advance or $32 at the door, go on sale Monday, Jan. 31 at the Sherman Theater box office (524 Main St., Stroudsburg) and online via shermantheater.com and Etix.

Cabinet wears their influences like badges, honoring the canon of roots, rock, reggae, psychedelia, blues, bluegrass, country, and folk, weaving these sounds into a patchwork Americana quilt. But this music isn’t romanticizing or rehashing the past. Cabinet makes their mark on today.

“We were just kids having fun, experimenting and making music with each other – still are!” the band said.

Cabinet formed in 2006, bringing together players from various musical and personal backgrounds. Some of the members were barely old enough to drink legally, but their thirst for older music was unquenchable. Whether its rustic “American Beauty”-era Grateful Dead or old-timey bluegrass, the band has digested it all. But that is not to say that Cabinet recreates older styles. No, this is music that might have its roots in the past, but it is current and vibrant, with a sense of celebrating the now.

Patrick “Pappy” Biondo hails from Cleveland, Ohio and now resides in Hinesburg, Vermont. Prior to Cabinet, he was in a garage indie band named “The Zeeks,” with Cabinet being his first touring band in 2006. He has helped the band progress throughout the years with his instrumental/songwriting efforts for over a decade. When not performing with Cabinet, he can be found leading or contributing to acts such as Gatos Blancos, Kick & Banjo, Owl & Crow, and An Appreciation of JJ Cale. In 2019, he also released a bluegrass EP under his solo effort as Pappy.

He has a studio in Burlington, Vermont where he contributes to the local art/music scene and mostly plays with organic sounds, creating experimental and dominantly instrumental music under the name KingZeek. In March of 2020, he co-founded Astrology Days Records with John Morgan Kimock. He also spends his free time making stained glass art and painting/illustrating from his home.

James “JP” Biondo grew up in Gouldsboro and has been writing songs since his early teens. He has been a singer most all his life, always enjoying the voice as an instrument. He has helped progress the group with his songwriting skills and mandolin playing for more than a decade and is responsible for much of the band’s original material. When not working with Cabinet, he can be found playing solo or supporting his debut full-length release “Blue Radio.” In addition to joining Pappy in Owl & Crow, he sings and plays guitar in a Scranton-based all-star group called The Mule Team.

Michael “Mickey” Coviello comes from Moscow, Pennsylvania and currently resides in Baltimore, Maryland. He has been playing guitar since he was very young. He and JP were peers at North Pocono High School, where they would eventually meet up and start playing music together. His guitar playing has helped move the band in and out of genres like rock, bluegrass, and reggae. When not performing with Cabinet, he can be found with his ambient project Mickey Coviello & The Herd Brothers as well as solo efforts.

Todd Kopec hails from Wilkes-Barre and has been contributing to the local art/music scene for over 20 years. His violin playing has been a staple in the Cabinet sound for over a decade. When not performing with Cabinet, he creates experimental music as Odd Pocket Selector and works in holistic AV/system design, integration, and operational technical solutions for iconic live music venues in the New York City area. He also enjoys circuit bending and making homemade instruments.

Dylan Skursky hails from Forty Fort and has been a making music since his early teens. He has assisted the greater Wilkes-Barre/Scranton area with his tasteful bass playing for many years and continues to do so. In addition to Cabinet, he can be found with many other outfits, including Starbird, Brad Parsons, and his own experimental project F.M.O.

Stanley “Jami” Novak hails from Dickson City and is a veteran of the Northeastern Pennsylvania music scene, weaving his way in and out of bands in the area for over 30 years, Cabinet included. His drum prowess speaks for itself and his playing is in high demand. When not with Cabinet, he can be seen with acts such as Dave Brown and the Dishonest Fiddlers, the Village Idiots, and his own Inner Stellar Space Project, a.k.a. H.B.

Brian “Nugget” Gorby grew up in the Ohio River Valley town of Wellsburg, West Virginia. Influenced by his father, he became interested in playing drums at an early age. He has contributed his grooves to numerous bands over the years, including Pittsburgh-area band Different Engine and Wheeling/Charlottesville-based jam band Humble Sacrifice in the 1990s. In the aughts, he formed, managed, booked, and toured with Appalachian roots rock band The Trainjumpers and an acoustic duo, Seven. In 2010, he joined the internationally touring band Hackensaw Boys, during which he recorded with Grammy-winning producer Larry Campbell and played numerous festivals and shows across the United States and abroad. He joined Cabinet in 2020 as a percussionist and continues to work on side projects Kick & Banjo and The Trainjumpers. He now resides in Charlottesville, Virginia with his family.

The Dirty Grass Players are known for having one toe-tappin’ foot in traditional bluegrass while pushing boundaries with their blazing musicianship. Composed of Connor Murray on bass, Alex Berman on vocals and banjo, Ben Kolakowski on guitar and vocals, and Ryan Rogers on mandolin, this Maryland group has been giving their growing fan base down and dirty performances for eight years.

Their ability to seamlessly transition from down-home bluegrass to spirited improvisation makes each performance unique. Mix in some Allman Brothers, Pink Floyd, or a dash of Southern rock and listeners quickly understand what they mean by “dirty grass.”

In 2020, The Dirty Grass Players released their second studio album, “Beneath the Woodpile.” Put together with alluring harmonies, lyrics, and melodies, the band presents a sound precisely at the crossroads of traditional and progressive bluegrass. This isn’t just another run-of-the-mill bluegrass album or band – it’s cathartic and dirty grass.

Brendan Brisk is a composer, producer, and multi-instrumentalist out of Wilkes-Barre. He is inspired by the Pennsylvania wilderness, outer space, and the great mysteries that exist beyond our senses. 2016 saw the release of his first album, “Astral Counterfeit,” a solo excursion that explores funk, soul, and jazz elements and plays upon the influences of Beck, Sly and the Family Stone, and Sun Ra.

Following this debut, Brisk connected with Bernard Gavlick (bass), Justin Malinowski (drums), and Miles Orfanella (trumpet) to bring his recordings to the stage. Artistic integrity is encapsulated through the band’s wild improvisations, turning their live shows into a platform for experimentation, expression, and creativity.

Brisk’s second release, “Relaxylvania,” builds upon the momentum of the band and introduces a collaborative flair to a continued exploration of unique, genre-bending sounds. “Relaxylvania” creates an atmospheric space that encompasses a diversity of energies, from its driving opening track “Fanfare” to the ethereal closer “Music for Gabriel.”

Brisk is currently an artist on the Astrology Days record label alongside Cabinet.