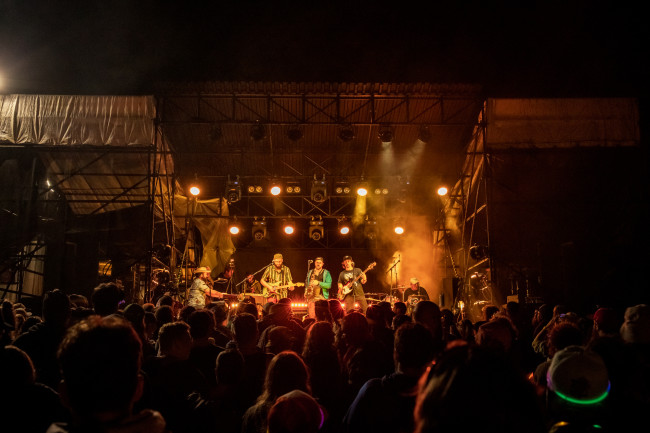 Harrisburg jazz/funk/soul group Yam Yam, who made their Peach Music Festival debut in Scranton last year, will return to the River Street Jazz Cafe in Plains on Saturday, Feb. 26.

Last week, it was announced that they will also be back at Peach Fest sometime during its four-day run from Thursday, June 30 through Sunday, July 3 at The Pavilion at Montage Mountain.

Since their inception in 2015, coming together from an assortment of local bands in Central Pennsylvania, Yam Yam has grown from playing impromptu jams to a few friends to headlining sold-out shows and jumping into main support slots for bands like Lotus, Keller Williams, and Dopapod. The band – keyboardist Mike Dempsey, guitarist Tom Fuller, drummer Tyler Fuller, bassist Xander Moppin, and saxophonist Jason Mescia – is inspired by 1970s soul music, the New Orleans roots of jazz music, and modern/vintage funk and jam music, featuring raw instruments and a highly energetic sound.

The group released their self-titled first album in late 2018 and it charted on Billboard Jazz Albums section at No. 17. They have quickly become one of the best-drawing staples in their music scene, known as true innovators of their craft. Winning over fans of all ages, tastes, and genres, Yam Yam has built a reputation around their ambitions to be one of the forerunners in soul/funk/jam music.

They have played shows with Aqueous, Pigeons Playing Ping Pong, Big Something, Here Come the Mummies, Andy Frasco & The U.N., and Brandon “Taz” Niederauer, among others, and jumped onto festivals like Peach Fest, Some Kind of Jam, Domefest, WayneStock, Gathering at Chaffee’s, Summer Camp Music Festival, and more.

In 2020, Yam Yam released a live record, “The Yam Yam Telethon (The Lingerie Room Sessions),” and followed it up in 2021 with their second studio album, “Double Dippin’,” which charted on Billboard Contemporary Jazz Albums section at No. 9.