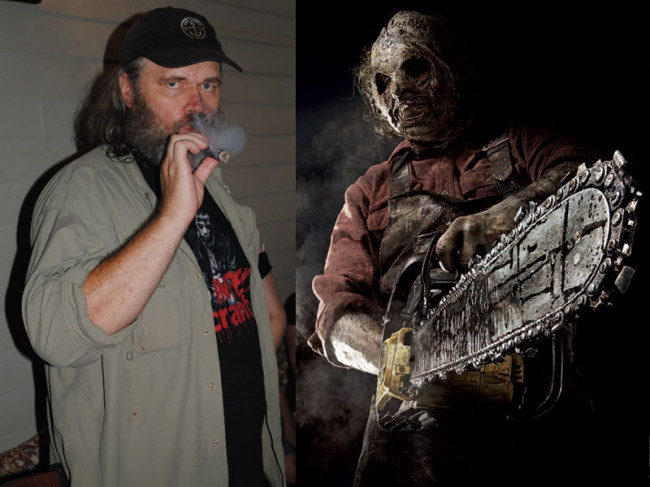 Following the February release of the latest entry in “The Texas Chain Saw Massacre” franchise on Netflix, the Northeast Pennsylvania Film Festival is going back nearly a decade to present “Texas Chainsaw” with one its main stars.

On Saturday, April 2, the festival will begin screening films at 11 a.m. at The Ritz Theater in downtown Scranton. The “horror block” that evening will feature the 2013 film and a Q&A with Dan Yeager, who played the infamous killer Leatherface in what was originally intended as the final chapter of the gruesome series.

A meet and greet with Yeager will be held from 6:30 p.m.-7 p.m. in the reception area, where fans can get photos and autographs. The movie will play from 7 p.m.-8:30 p.m., followed by a question and answer session moderated by filmmaker and movie reviewer Jeff Boam from 8:30 p.m.-9:30 p.m. The actor will then join guests for an afterparty.

“Dang! I enjoyed ‘Texas Chainsaw.’ It has one of the cheesiest lines in horror movie history, but at the end… well, no spoilers. I may have to go down to Scranton to check this out!” Yeager joked about his upcoming appearance on Facebook.

“Hey! Wait a minute. I thought he looked familiar. I am going to Scranton! Maybe I’ll see you there.”

Tickets for the NEPA Film Fest at The Ritz (222 Wyoming Ave., Scranton), which range from $20 (day pass or horror block only) to $95 (festival passport), are on sale now at nepafilmfestival.com. Read the full schedule with film descriptions here.

“Texas Chainsaw” is the seventh installment in “The Texas Chain Saw Massacre” franchise and was first presented in 3D. The film serves as a direct sequel to the original movie, ignoring the events of the subsequent installments. It stars Alexandra Daddario, Dan Yeager, Trey Songz, Tania Raymonde, Scott Eastwood, Thom Barry, Paul Rae, and Bill Moseley with Gunnar Hansen and Marilyn Burns, who appeared in the first film in 1974.

The story centers on Heather, who discovers that she was adopted after learning of an inheritance from a long-lost grandmother. She subsequently takes a road trip with her friends to collect the inheritance, unaware that it includes her cousin, the cannibalistic murderer Leatherface.

Directed by John Luessenhop, “Texas Chainsaw 3D” was released on Jan. 4, 2013 and became the last film both Burns and Hansen starred in before they died in 2014 and 2015, respectively. It was followed up in 2017 by a prequel simply titled “Leatherface.”

Yeager grew up in Ohio, where he fostered a love of horror movies. While helping a friend develop a reality television show pilot, he met Carl Mazzacone, producer of “Texas Chainsaw,” which led to him securing the role of Leatherface. He studied screenwriting at the American Film Institute and has several completed feature scripts in development. In 2015, Yeager co-founded a film production company called Bad Anger Pictures. He currently lives in New York and regularly attends horror conventions.