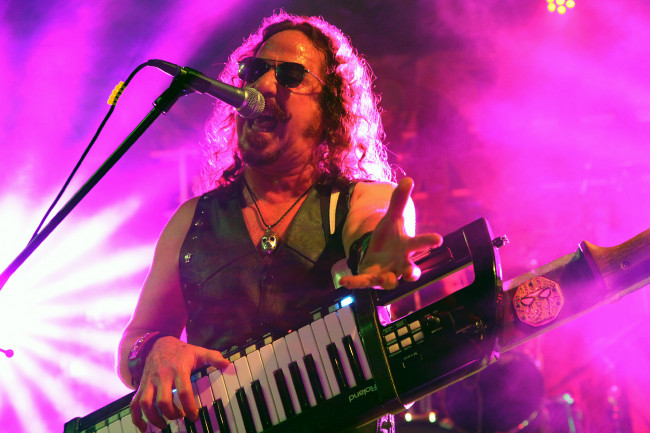 Wilkes-Barre’s own horror rockers All the Damn Vampires will kick off the 21+ show.

First Jason previously performed at the venue in May of 2019 and came back to Northeastern Pennsylvania in September to headline the second night of the inaugural Darkenheavy Campfest at Mountain Sky in Jermyn. In 2021, the band recorded the apocalyptic music video for their single “The Price of Peace” in NEPA with local production company Camp Rattler and premiered it on NEPA Scene with a behind-the-scenes article.

Ari Lehman is a 56-year-old performing artist, composer, and actor best known for playing the first Jason Voorhees on screen in the popular slasher film “Friday the 13th.” A native New Yorker, he grew up in Westport, Connecticut, where he trained in classical music and jazz piano. Lehman was presented with an All-State Award for Excellence in Jazz Piano and a scholarship to the Berklee School of Music by famous jazz educator Dr. Billy Taylor.

Lehman heard about an audition being held in Westport for the movie “Manny’s Orphans” about a group of inner-city orphans who play soccer, directed by Sean S. Cunningham. He snuck into the audition and landed the 80-line role of “Roger.” This led to him getting the call to play the mistreated child Jason Voorhees in Cunningham’s “Friday the 13th.” For his audition, he was asked one key question by the director: “Can you swim?” He appeared in Pamela Voorhees’s flashback and Alice Hardy’s dream, the iconic final Crystal Lake scene in the film. It was special effects artist Tom Savini who suggested to Cunningham, after he had seen “Carrie,” that they should have a shock ending too and that the boy could jump out of the lake. Lehman also appears as young Jason in archive footage in “Friday the 13th Part 2” (1981) and “Friday the 13th Part IV: The Final Chapter” (1984).

After the release and success of the first “Friday the 13th,” Lehman returned to New York City where he enrolled at New York University and concentrated on big band orchestration and jazz piano, studying with the likes of Vladmir Shafranov. His career led him to become a prominent touring keyboardist for some of the top names in reggae and African music of the time, with whom he toured throughout the United States, Europe, and West Africa and recorded with at Tuff Gong Records and Interscope Records.

Lehman went on to form his own world rock and reggae group, the Ari Ben Moses Band, and gained acclaim when, upon moving to Chicago in late 2002, he was contacted by horror fans who invited him to attend an East Coast horror convention. In response to their enthusiasm, he became a regular on the horror convention circuit and saw an opportunity to give Jason Voorhees a musical voice in the punk and metal scene.

Wielding a keytar shaped like a machete, Lehman created First Jason in 2004, a punk/metal band specifically for horror fans, especially fans of Jason and the “Friday the 13th” franchise. They have independently released four albums: “Jason Is Watching!” (2009), with “Nefarious” (Charles Lescewicz) from Chicago death metal band Macabre playing bass and “Cleaver” (Amit Shamir) from New York hardcore punk band Cro-Mags on drums; “Heed My Warning” (2013), described by Uber Rock as “a brand of thinking man’s horror-themed rock;” “To Be a Monster” (2017); and their most popular record to date, “Lord of the Lake” (2019), that contains the hits “Kill for Mother” and “Voorhees Is the Name,” which both have their own music videos. The group’s latest singles, “The Price of Peace” and “Scapegoat,” were released in 2020. The former received a music video filmed in Dalton in 2021 that went on to become their most-viewed video to date.

In a review, Uber Rock wrote, “When you consider that Lehman was barely a teenager when he hopped aboard the horror express to lifelong notoriety, it’s some achievement. The more blinkered of horror rock fans may well balk at the sounds summoned up by the outfit (Lehman, on vocals as well as “keychete,” joined on the recording by drummers…), the electric machete keytar stabbing out a soundmix of distorted guitar and bass, but few could argue that Lehman is, once again, creating something memorable by borrowing from the past and updating with his own vision… just like Cunningham did in 1980.

“Over 30 years after making his brief, yet memorable appearance as Jason Voorhees and Lehman continues to promote his part in the franchise, not only paying tribute to his character in his music, but also contributing to the likes of [documentaries] ‘Crystal Lake Memories’ and ‘His Name Was Jason: 30 Years of Friday the 13th.'”

Since “Friday the 13th,” Lehman has appeared in a number of independent and short films. He has also composed, performed, and recorded soundtracks for indie movies, including Alexia Anastasio’s critically acclaimed all-female “Salomé” and Vamp Films’ “Vampire the Movie,” which won the 2007 Rondo Award for Best Independent Feature.

Starting in 2004, Lehman has supported a number of causes through in-kind contributions and special appearances. It’s no secret, however, that he is passionate about animals and has personally hand-rescued all his pets from the streets. Beginning in 2015, Lehman and First Jason’s primary focus has been outreach to select rescue groups and no-kill shelters to help build awareness, support, and advocacy in order to enhance the quality of life for abandoned and homeless cats and pit bulls.