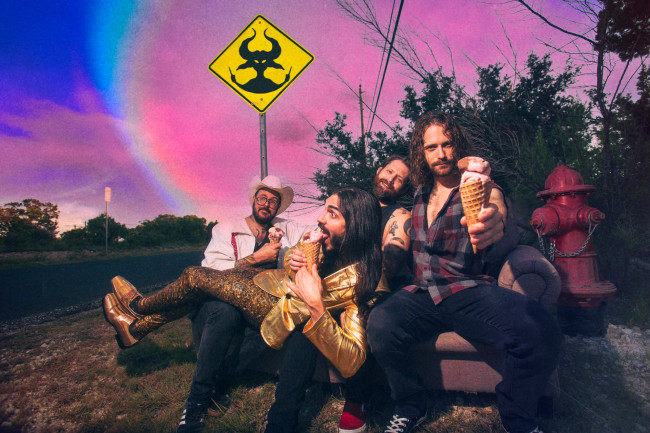 Today, Pottsville hard rockers Crobot are looking forward to “Better Times,” the first single from their next studio album of dirty groove rock called “Feel This.”

“You know we wouldn’t have it any other way. Buckle up and strap it down because Crobot is comin’ back to town. And with smiles on our faces, we’ve got all the right grooves that hit in all the right places. See you out there this spring for some ass shakin, ear smackin’ thangs!”

That includes an upcoming tour opening for the legendary Danzig and Cradle of Filth, running May 5-19.

Produced by Jay Ruston (Anthrax, Stone Sour, Corey Taylor, Steel Panther), “Feel This” is set for release soon after on Friday, June 3 via Mascot Records/Mascot Label Group. In the meantime, “Better Times” can be streamed and downloaded alongside a new music video directed by William “Wombat” Felch, who also created the last batch of videos for their 2021 EP “Rat Child.”

The riff monsters in Crobot conjure up the kind of rock ‘n’ roll that has grooves so powerful they throw you around the room and hooks high enough to shake the heavens. They take the sweet-sounding nectar of the gods and pour it down your throat until you’re wailing along like a banshee.

Their fifth full-length is the follow-up to 2019’s Top 10 Heatseekers album “Motherbrain,” whose cumulative streams have surpassed 30 million. 20 million of those were from the goliath single “Low Life,” a U.S. Top 10 hit on active rock radio with a lengthy 29-week run on the Billboard Mainstream chart.

“This is the record we’ve been wanting to do ever since we started,” Yeagley exclaimed.

“We’ve always thought of ourselves as a live act. When Jay Ruston described his process of recording, we were beyond excited about getting in and getting our hands dirty. It involved performing live as a unit and finishing all instruments on a song before moving on to the next. We recorded 16 songs in 21 days, which is a feat in itself.”

“Feel This” is a tale of perseverance.

“Through constant struggles, we learn more what it’s like to be human. Our shortcomings and strengths alike make us a unique species,” Yeagley reflected. “‘Feel This’ very well may point to our biggest strength of all – our ability to feel emotion (for better or worse).”

Human nature is threaded throughout the album, from volatile relationships (“Dizzy”) to imperfections and learning from mistakes on “Holy Ghost.” Its warbling harmony wraps around the wah-drenched guitar straight out of Seattle; Brandon’s grungy wail rings out on the hook, “I am not the holy ghost. I won’t ever save your soul.” There’s “believing in something so much” on “Set You Free,” which spirals towards a seismic crescendo and emotionally charged guitar lead from Bishop.

Around the psyche-digging lyrics, they are never far away from thunderous rock ‘n’ roll. “Electrified” kickstarts the album as a rip-roaring live wire anthem.

There’s an epic anti-hero tale on “Without Wings,” and then there’s “Dance with the Dead.” Forgetting your troubles over an irresistible groove, the song struts with high-register harmonies and the infectious chant of, “Let’s go dance with the dead. They know how to kill it!”

“Golden” is a soaring homage to a god gone too soon.

“When it came to the lyrics, we collectively wanted it to be a tribute to Chris Cornell,” Yeagley noted. “We’re so influenced by everything he and Soundgarden have done. We ran with the song in honor of his legacy.”

The Schuylkill County natives made waves with “The Legend of the Spaceborne Killer” (2012), “Something Supernatural” (2014), and “Welcome to Fat City” (2016). However, “Motherbrain” (2019) represented a high watermark. They’ve crisscrossed the U.S. and the world in road warrior style, playing with the likes of Anthrax, Black Label Society, Chevelle, Clutch, Volbeat, and more. They’ve lit up festival bills and the annual ShipRocked cruise.

“We tour the pockets off of our pants and sleep in our van for half of the year. To some, that may seem like misery, but to us, it’s heaven, baby!” the frontman enthused. This is something they highlight on the new song “Livin’ on the Streets.”

2019 ended with a U.S. tour supporting Steel Panther, and then COVID-19 punched the world in the face. As the global pandemic descended upon the country, Bishop and Ryan hunkered down in Austin, Texas to jam and cut demos, sending ideas to Yeagley back in Pennsylvania (who recorded some star-studded jams under quarantine). 2021 saw the boys enter Orb Recording Studios in Austin with Ruston.

“We never want to make the same album twice,” Yeagley left off. “There is something for every Crobot fan out there as well as newcomers. At the same time, we’re having fun. We want to be taken seriously, but not too seriously, because this is monkey hour, after all.”

“That’s the fucking line right there,” Bishop agreed. “We want you to walk away smiling. If I can make you smile, I’ve done my job.”