Today, Hoy Jun Park was named the Scranton/Wilkes-Barre RailRiders’ Player of the Week for the second consecutive week. Catch him at PNC Field while you still can. Here are some photos of him taken on May 27 when the team won against the Buffalo Bisons. Congrats, Hoy!

Grammy-nominated comedian Jim Gaffigan put the keys in the ignition of his Drive-Thru Comic Tour on July 12 in New Jersey and, just a few days later, he rolled into the parking lot of Mohegan Sun Arena at Casey Plaza in Wilkes-Barre Township. Hundreds of people pulled up to socially distanced parking spots to hear […] 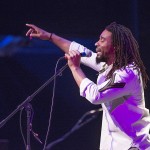