From a press release: Wilkes-Barre music venue Karl Hall is reopening in January, which means Barnstorm Booking is returning as well. The local promoter’s first concert since February of 2020 will be a release show for “When It’s Over,” the new four-song EP by Plains pop punk band Into Sunday, on Friday, Feb. 4. “We’re […] 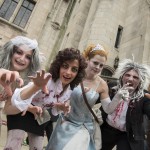