While stuck at home in quarantine, many people are posting old photos and videos on social media to cheer themselves and others up until the coronavirus pandemic has subsided. Motionless In White vocalist Chris “Motionless” Cerulli uploaded a series of photos and a short video yesterday that is a special treat for their hometown fans […]

On the 10th anniversary of his death, many articles have been published today memorializing Peter Steele, the singer, songwriter, and bassist of gothic metal band Type O Negative, but only a few mention that he passed away in Scranton. That may seem like an unlikely place for a rock star to reside, but public records […]

Last year, legendary heavy metal band The Rods released their first full-length album of original material in eight years, “Brotherhood of Metal,” and drummer Carl Canedy debuted a new band for his solo project, Canedy. This year, The Rods are changing things up even more, announcing a new lineup and album that sees the departure […]

For seven years, Samantha Ruddy’s career in stand-up comedy has built up to this moment. After her big break on “The Late Show with Stephen Colbert” and landing a job on “Full Frontal with Samantha Bee,” she released her debut comedy album one month ago… the same day a national emergency was declared in the […]

In the past month, Pennsylvania Governor Tom Wolf issued a stay-at-home order and closed non-essential businesses due to the coronavirus, so many people are looking for ways to spend their time. Centralia fire chief and EMA director Tom Hynoski told The Daily Item that large groups have been visiting the Graffiti Highway, a stretch of […] 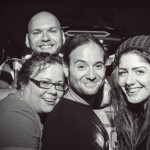