STRENGTH & FOCUS: How to pay it forward

Today’s focus will be on the idea and practice of paying it forward. Perhaps you remember the film “Pay It Forward” (2000) starring Kevin Spacey, Helen Hunt, and Haley Joel Osment. In the movie, the young character Trevor McKinney (Osment) is given an assignment by his teacher, Mr. Simonet (Spacey): to think of something that […]

Warmer days in Northeastern Pennsylvania bring hikes on the Appalachian Trail, whitewater rafting tours, mountain bike adventures and, of course, weekend camping trips. No matter where you plan on going, or by what means, the most important part in any journey is having a clear destination. Sure, some folks prefer to wander aimlessly in hopes […]

A few weeks ago, I wrote about spring cleaning and getting rid of the mental and emotional junk cluttering your mind. If you need a refresher, go ahead and revisit those discussions here and here. For this week’s episode of excellence, I decided to put together a list of 20 ways to enjoy your spring. […]

As a column, Strength & Focus primarily serves as a mind and body feature; however, we also like to cover events and people who are active in helping to make Northeastern Pennsylvania a more enriching and positive community. This week, I had the chance to sit down with Frank Hershberger (DJ Hersh of the BeatTeks […]

Today’s Strength & Focus piece is going to be a little different. Over the past few months, as a writer for NEPA Scene, I’ve had the opportunity to interview some really phenomenal people. Well, today I’m in the hot seat! This morning, I was interviewed on “The Mike Calderwood Show” through Google Hangouts, which streamed […]

Since today is a great and noble holiday in the Star Wars Universe, I thought we should examine some immortal words of wisdom from one of the greatest teachers the galaxy has ever known. In that memorable scene in “The Empire Strikes Back,” Yoda is training a young Luke Skywalker in the ways of the […]

Last week, we discussed “Spring cleaning for your mind,” and after some really positive feedback, I decided to continue this topic further. We primarily focused on thoughts, behaviors, and choices that have a negative impact on our lives, but what about poor and/or destructive relationships? Relationships take many forms. Let’s take the root word which […]

As the weather gets warmer, we’ll all take part in that time-honored tradition of spring cleaning! Many of us will pick a weekend to reorganize storage space, throw away the crap that clutters our closets, and eliminate the junk that we no longer have any use for. Now, as we begin to deposit these material […]

Have you ever witnessed, experienced, or even taken part in a verbal exchange where people are arguing over whose problems are worse? Maybe you’ve seen it on social media or observed it in person – people actually debating and trying to compete over having the biggest problems. What does this accomplish? Are awards handed out […]

STRENGTH & FOCUS: How can I be more happy?

Recently, we discussed self-talk, more specifically the thoughts we think and the words we say to ourselves each day. What is it that you tell yourself? You know, when you speak, you are listening! We also talked about taking responsibility and taking control of your thoughts, emotions, and actions – being responsible for yourself and […] 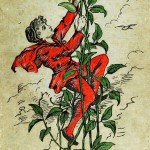 THE REAL GIG: Musicians, heed the wisdom of ‘Jack and the Beanstalk’
STRENGTH & FOCUS: Give your health a makeover!