Once the word was out that Coheed and Cambria was playing a free “secret” acoustic show at the Gallery of Sound in Wilkes-Barre on Thursday, May 16, it was the worst kept secret in Northeastern Pennsylvania. With just a few days notice after the news broke, over 300 people piled into the small indie record […]

On an unseasonably chilly, rain-filled Saturday in September, seven-time Grammy Award winner Alanis Morissette brought her current tour to the first-ever Outdoor Summer Concert Series at Mount Airy Casino Resort in Mount Pocono. Over 2,000 fans packed into the sold-out pavilion to see the queen of alt-rock angst in all her glory. On a day […] 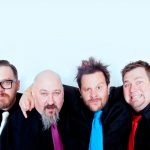