First Friday Scranton on Sept. 5 had everything from fish sculptures to tile art. Take a look at just a few of the stops we made at this month’s art walk. 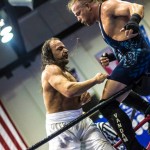