PA Oktoberfest rolled into Mohegan Sun at Pocono Downs in Wilkes-Barre this past weekend for its fourth annual Oktoberfest celebration. The event kicked off Friday, Sept. 12 with a three-day celebration of food, entertainment, and most importantly, beer! Visitors had the pleasure of sampling food from 13 local vendors, including Fire & Ice’s Jager Schnitzel […] 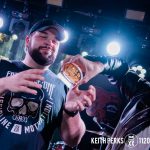