STRENGTH & FOCUS: YOLO? No no!

I recently had the opportunity to speak with a few teenagers, and during the course of the conversation, one of the teens began to brag about some wild adventures and ended the story with, “YOLO!” The statement “You Only Live Once” (YOLO, in pop culture) has been made popular to excuse sometimes foolish, irresponsible, or […]

From a press release: The Lackawanna Historical Society has announced two fall programs to benefit the Society in November. On Saturday, Nov. 8, the Society will host the premiere of a student documentary about the 1881 fire at that destroyed St. Patrick’s Orphanage. The program will be held in the auditorium at All Saints Academy […]

Greetings, friends, I’d like to take a moment to thank all of my readers who e-mailed to share stories and ask questions in regards to the weekly topics. I’m forever grateful to know that this column has been able to help, motivate, and inspire so many people in such a short amount of time since […]

Please, I beg you, don’t buy likes or followers from bots or sketchy websites that offer “10,000 likes for only $12.” To start, people in the music industry know that those likes aren’t real. We can see it from a mile away because we deal with it everyday, and the people that matter like booking […] 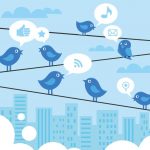