From a press release: The Writers’ Showcase reading series, hosted by local poets Brian Fanelli and Dawn Leas, will make its return at a new venue, the Olde Brick Theatre (126 W. Market St., Scranton), on Saturday, June 27 at 7 p.m. Formerly, the series was held monthly at New Visions Studio & Gallery and […]

From a press release: The Scranton Zine Fest is an annual celebration of groundbreaking visual artists and writers. More specifically, the festival is a celebration of zinesters, distros, artistic press publications, and letterpress artists, complete with workshops, food, and live entertainment under one roof for the public to enjoy – free of charge. It also […]

Peckville singer/songwriter Katie Evans has been attending the NEPA Scene’s Got Talent open mic and talent competition since Week 1, and as she performed better and better each time, her persistence paid off. After several weeks of coming close, she won the audience vote with her original and cover songs on acoustic guitar on May […]

alking into Erin Rovin’s Scranton home, New Orleans can be seen everywhere, from little trinkets spread throughout to colorful art adorning the walls. Though she’s from the Electric City, a little piece of her has remained in NOLA since her honeymoon. As a writer, she began with celebrity gossip and moved into writing about New […]

There were a few less performers than usual at Week 5 of the NEPA Scene’s Got Talent open mic and talent competition, but the level of talent on display continued to climb on Tuesday, April 21. Jason Vo returned to play his original guitar compositions, but this time he brought along his friend Bryan Banks […]

In a night that featured many great musical performances, a consistent crowd favorite at the NEPA Scene’s Got Talent open mic and talent competition took the audience vote on Tuesday, April 14. Grant Williams (pictured above), the former bassist for Graces Downfall, debuted some of his original bass compositions at Thirst T’s Bar & Grill […]

Week 3 of the NEPA Scene’s Got Talent open mic and talent competition was so unpredictable that even the group who won the audience vote on Tuesday, April 7 didn’t know what was going to happen until they started jamming onstage. Handpan player Steve Werner, cellist Dan King, and drummer Matt Montella – who had […] 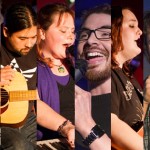 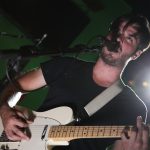