From a press release: Local LGBTQ+ activists Queer NEPA typically celebrate national LGBTQ Pride Month with a series of events across Northeastern Pennsylvania every June. The coronavirus pandemic has changed those plans this year, but not canceled them. On Saturday, June 27 at 7 p.m., Queer NEPA will host “Queer Night In: A Charity Livestream” […]

From a press release: When did you last hang out with Jim, Pam, Dwight, Michael, and the rest of the Scranton branch of Dunder Mifflin? It might have been back in 2013, when “The Office” finale aired… or it might have been last night, when you watched three episodes in a row. But either way, […]

From a press release: The Lackawanna County Library System has announced that bestselling author and humorist David Sedaris is 2020’s American Masters Lecture speaker in its Matthew F. Flynn Library Lecture Series. Sedaris is the author of 11 collections of essays, many of which appeared first in The New Yorker. The titles of his books […] 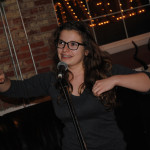