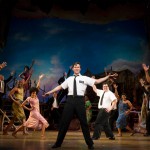 ‘The Book of Mormon’ takes its mission to the Scranton Cultural Center Oct. 27-Nov. 1