From a press release: The F.M. Kirby Center for the Performing Arts in Wilkes-Barre is inviting the community to attend its Winter Wonderland event on Saturday, Nov. 28. Winter Wonderland visitors can embrace the holiday spirit through a day of holiday movies, shopping, singing, and decorating without ever having to venture outside the Kirby Center […]

From a press release: Don Rickles is one of comedy’s most famous funnymen. In fact, he is a comedic living legend. For over 55 years, he has appeared in top showrooms and concert halls throughout the U.S. and internationally, and he’ll be performing at the Sands Bethlehem Event Center on Thursday, May 12, 2016 at […] 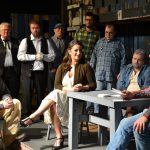 Act Out Theatre in Dunmore presents Steinbeck classic ‘Of Mice and Men’ Jan. 10-12