From a press release: The Scranton Zine Fest is an annual celebration of groundbreaking visual artists and writers. More specifically, the festival is a celebration of zinesters, distros, artistic press publications, and letterpress artists, complete with workshops, food, and live entertainment under one roof for the public to enjoy – free of charge. It also […]

Since opening on Aug. 30, 2013, The Other Side in Wilkes-Barre has become an integral part of the Northeastern Pennsylvania music scene, hosting original bands of all genres almost every week, though that role has not come without hard work, sacrifice and, recently, controversy. It was announced on Feb. 25 that crossover thrash band Dirty […]

Since the beginning of 2015, Scranton hard rock band Silhouette Lies has been locked in the studio working tirelessly on their debut full-length album. Now NEPA Scene gets to unleash the exclusive premiere of the first haunting single from that album, “The Scarecrow Walks at Midnight.” “Lyrically, the song is about a serial killer and […]

A sense of community was strongly felt at NEPA Metal Meltdown on Friday, May 8 and Saturday, May 9. Everyone at Diane’s Deli & Internet Cafe in Pittston seemed to know each other, and those who knew few people quickly bonded over their love of metal music with others. This was NEPA Metal Meltdown’s second […]

PUTTING IN WORK: Put up or shut up – NEPA is home

As you might have seen, we just launched the logo contest for the Culture Shock! Free Music and Art Fest. For those of you who don’t know, Culture Shock is a day-long festival at Nay Aug Park in Scranton. It’s has two stages of music, an art show, food and merch vendors, and my favorite […]

Two heavy metal heavyweights, Slipknot and Hatebreed, warmed up a cold night on Montage Mountain in Scranton with mosh pits and pyrotechnics on Wednesday, May 13, just a few days after the Susquehanna Breakdown music festival kicked off the concert season at The Pavilion. With no other opening act needed, Hatebreed easily riled the crowd […] 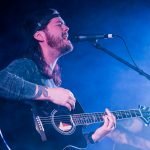