Recognition for one’s talent is always appreciated. For Charlie Russello, that recognition took place in the form of Guitarist of the Year Award at the first annual Steamtown Music Awards – an award that he’s been the owner of, in the minds of fans and fellow guitarists in the area, for over 20 years. Charlie […]

From a press release: Back by popular demand, the F.M. Kirby Center for the Performing Arts announced the return of its “Live from the Chandelier Lobby” concert series yesterday, which will feature one performance per month beginning in November and running through April 2015. The intimate music series, held in the spacious and comfortable confines […]

Review submitted by Giovanna Arcadu It was undeniable that hundreds of excited audience members came to hear The Wailers perform Bob Marley‘s songs of love and peace at the F.M. Kirby Center on Friday night, Oct. 10, and while the legend himself could not be there, it felt like he was performing that night, brought […]

Each week, Joe Nardone’s Gallery of Sound provides NEPA Scene with the Top 40 best-selling albums in its Northeastern Pennsylvania stores from the previous week. Every album is followed by its rank from the week before. “D” indicates a debut this week.

Nashville blues rocker Patrick Sweany was the musical guest this year at “The Faces and Voices of The Blues III” on Oct. 4-5, organized and hosted by PocoNotes at the Tripp House in Scranton. The “soon-to-be-legendary guitar man,” as described by Rolling Stone, performed and held a guitar workshop that weekend. New Jersey photographer William […]

The Steamtown Music Awards were held on Friday, Oct. 10 at the V-Spot in Scranton, which was just the start of the Electric City Music Conference, running all weekend long. Live performances and panels were held in several venues throughout Scranton and Olyphant with the main goal of the conference “to highlight local talent and […]

From a press release: SiriusXM announced on Friday that Boyz II Men will perform a live concert on Oct. 14 from the school where they met, the Philadelphia High School for the Creative and Performing Arts, on SiriusXM’s Heart & Soul channel. “Up Close & Personal with Boyz II Men” will feature Boyz II Men, […] 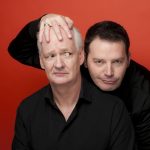