The Queers still ‘schlepping it’ in their own way, stopping at Eleanor Rigby’s in Jermyn on May 25 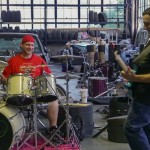