From a press release: Séan McCann, a founder of iconic Canadian folk rock band Great Big Sea and an Order of Canada recipient for his advocacy of people living with mental health and addiction issues, has spent the last 10 years touring North America as a solo concert performer and musical keynote speaker, singing and […]

From a press release: After recently opening for multi-platinum alternative rockers Fuel, fellow Lehigh Valley Pennsylvanians Another Day Dawns announced that they have signed to Century Media Records in partnership with The Orchard. “It’s honestly been a dream come true,” frontman Dakota Sean started. “We’ve been working towards this goal ever since we were kids […] 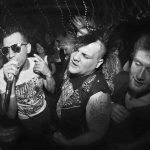