From a press release: The Leadership Lackawanna Core Program Class of 2016-2017 will complete three service projects in Scranton this year. As part of the 10-month curriculum, participants collaborate with local nonprofit organizations to complete various projects. In doing so, it helps enhance participant leadership skills and fosters teamwork. These projects impact the community, address […]

The third annual Electric City Music Conference packed so much music into one weekend – over 150 bands across 12 venues along with the Steamtown Music Awards from Thursday, Sept. 15 through Saturday, Sept. 17 – that you may have partied a little too hard to make it to the fun and educational panel discussions […]

From a press release: Playwright and performer Michael Burgos will return to the Scranton Fringe Festival with his internationally-acclaimed and award-winning solo show “The Eulogy” at the AfA Gallery (514 Lackawanna Ave., Scranton) on Friday, Sept. 30 at 6 p.m.; Saturday, Oct. 1 at 4 p.m.; and Sunday, Oct. 2 at 7 p.m. “The Eulogy” […]

Back in June, NEPA Scene premiered the very first song, “Only in the Way,” from University Drive, the brand new project from Scranton singer/songwriter Edward Cuozzo, so of course we had to catch the band’s anticipated debut show at the AfA Gallery in downtown Scranton, particularly with such a solid lineup of alternative, indie, and […]

From a press release: The Scranton Fringe Festival may only be held once a year, but its organizers have much more planned throughout 2016. Less than two weeks after announcing its second year, the festival has announced a recurring all-ages music series in partnership with the AfA Gallery in downtown Scranton. Starting in March, the […]

The band's sophomore album released today, with shows to follow

ince the release of “Kindness,” their debut EP, this time last year, Esta Coda has been overwhelmed by that very sentiment – from fans, critics, and fellow musicians alike in the Northeastern Pennsylvania music scene. It’s easy to see why. Since forming in Scranton in late 2012 as their former bands – Fake Estate, Livingston, […] 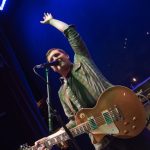