From a press release: Hersheypark has announced its 115th season will begin on Friday, April 2, with a new ticket offer reflecting the best price of the year for vacationers planning to travel in 2021. Last year, the coronavirus pandemic delayed or canceled many summer plans, but the Hershey, Pennsylvania amusement park was able to […]

The National Amusement Park Historical Association released the results of its 30th annual NAPHA Amusement Park and Attractions Survey on Monday, May 2, and Knoebels Amusement Resort in Elysburg, Pennsylvania has once again been voted to the top in several categories. Knoebels, which opened for its 90th season last weekend, was named “Favorite Traditional Amusement […] 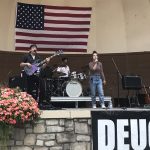