Yesterday, the city of Wilkes-Barre canceled both of its free annual springtime events, the Cherry Blossom Festival and the Fine Arts Fiesta, due to the coronavirus pandemic. The 43rd annual Cherry Blossom Festival was scheduled for Saturday, April 25 and Sunday, April 26 at Kirby Park. In previous years, it featured amusement rides and games, […]

From a press release: It was announced this week that high-energy brass funk band Lucky Chops will come from New York City to headline Saturday night of the 2019 Fine Arts Fiesta on Public Square in downtown Wilkes-Barre on May 18 at 7:30 p.m. The Fine Arts Fiesta, a community celebration of diversity, talent, passion, […]

From a press release: Partnering for the sixth year, Lackawanna County and ScrantonMade’s popular Arts on the Square event, held annually on Courthouse Square in downtown Scranton, will change its name and date in 2018 to coincide with other Scranton events and become a larger weekend attraction. The partnership decided it was time to change […] 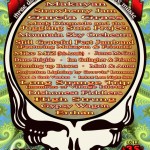