From a press release: The Grateful Bluegrass Boys, a string band that plays traditional bluegrass versions of classic rock favorites from bands such as the Grateful Dead, Bob Dylan, Van Morrison, the Eagles, the Rolling Stones, and more, will perform at the Mauch Chunk Opera House in Jim Thorpe this Thursday, Feb. 16 at 7:30 […]

From a press release: Cabinet, the nationally acclaimed bluegrass outfit hailing from Scranton/Wilkes-Barre, has announced the lineup for the fifth annual Susquehanna Breakdown Music Festival taking place on Friday, May 19 and Saturday, May 20. A family friendly gathering in a picturesque location, Susquehanna Breakdown is returning to The Pavilion at Montage Mountain in Scranton […]

From a press release: There have been many versions of The Who’s “Tommy” over the years, but The HillBenders have created “Whograss” with their own bluegrass version of the iconic concept album that the band will perform live at The Theater at North in Scranton on Friday, Feb. 10 at 7 p.m. Tickets are $25 […]

Enjoying the sound of one band or another may depend on taste, but anyone who saw the Coal Town Rounders perform over the last few years seemed to universally love the bluegrass quartet from Scranton, bringing audiences young and old back to a simpler time as they harmonized around one old fashioned radio microphone with […] 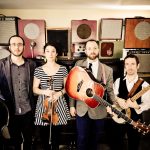