From a press release: Hard rock band Earshot, best known for such hits as “Get Away,” “Headstrong,” and “Wait,” started the new year by releasing their first original song in five years on Jan. 1, appropriately titled “Been a Long Time,” and on Feb. 4, they followed it up with a new music video as […]

From a press release: Chart-topping hard rock band Earshot, who are best known for such hits as “Get Away,” “Headstrong,” and “Wait,” is coming out swinging in 2021 as they unveil their first original song in five years and reveal details about their forthcoming collection of new material. The appropriately titled “Been a Long Time” […]

Nick Coyle, a solo artist from Berwick as well as the singer of Wilkes-Barre nu metal band Lifer and guitarist/backing vocalist of Cold, is back with a new entry in his all-star “Corona Sessions” series, this time bringing in even more local artists for a quarantine jam with past and present members of Crobot, Breaking […] 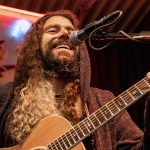