Today, Lehighton hard rock band Another Day Dawns debuted at No. 40 on the Mediabase Active Rock Chart with their single “Taste of Heaven,” a notable feat for any unsigned artist. The lead track from their new EP, “Stranger,” has over 100,000 streams on Spotify, and the music video, which was filmed in Pittston, has […]

Last week, a big benefit show was announced for Bret Alexander, one of Northeastern Pennsylvania’s most loved and respected musicians. Headlining this massive lineup of local artists is a series of reunion performances, and one more that was just added today will be a welcome surprise for fans of Breaking Benjamin and local rock music. […]

Aaron Bruch, the bassist and backup singer for multi-platinum Wilkes-Barre rock band Breaking Benjamin, joined many fans and fellow musicians today in remembering Kurt Cobain on the 25th anniversary of the frontman’s death with an acoustic take on a classic Nirvana song. In his first upload to his new YouTube channel, Bruch posted a simple […]

From a press release: After playing a hometown show in Scranton back in August, it was announced today that multi-platinum-selling Wilkes-Barre rock band Breaking Benjamin will perform at the Sands Bethlehem Event Center on Saturday, Dec. 29 at 8 p.m. Tickets, which are $59.50, plus applicable fees, go on sale this Friday, Nov. 2 at […] 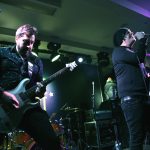